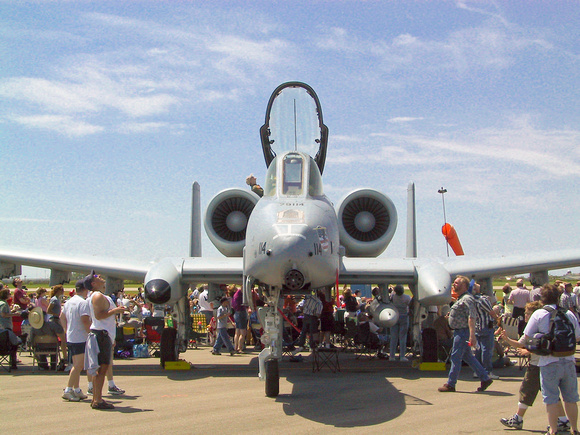 The Republic-Fairchild A-10 'Warthog' attack aircraft displays its 30mm gattling canon in the nose. af79-114 AFRC "Thunderbolt of Columbia".

Although the A-10 'Thunderbolt II" can carry a considerable amount of munitions, its primary built-in weapon is the 30×173 mm GAU-8/A Avenger autocannon. One of the most powerful aircraft cannons ever flown, it fires large depleted uranium armor-piercing shells. The GAU-8 is a hydraulically driven seven-barrel rotary cannon designed specifically for the anti-tank role with a high rate of fire. The cannon's original design could be switched by the pilot to 2,100 or 4,200 rounds per minute. This was later changed to a fixed rate of 3,900 rounds per minute. The cannon takes about half a second to reach top speed, so 50 rounds are fired during the first second, 65 or 70 rounds per second thereafter. The gun is accurate enough to place 80 percent of its shots within a 40-foot diameter circle from 4,000 feet while in flight. The GAU-8 is optimized for a slant range of 4,000 feet with the A-10 in a 30-degree dive.
Photo by Craig on Saturday, June 08, 2002 at the Fargo AirSho.
2002, 2019 by Craig Maas.
Powered by ZENFOLIO User Agreement
Cancel
Continue