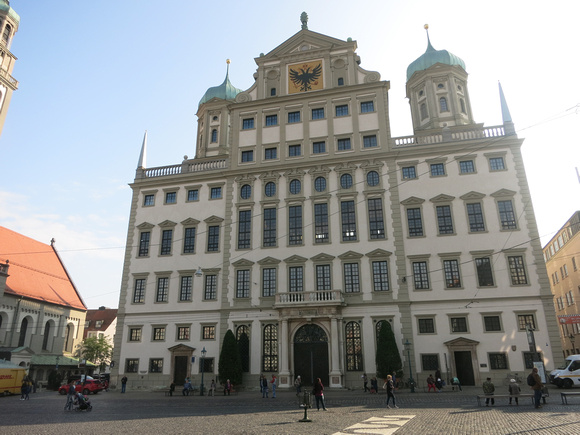 Augsburg Town Hall, German (DE).
The Town Hall of Augsburg (German: Augsburger Rathaus) is the administrative centre of Augsburg, Bavaria, Germany, and one of the most significant secular buildings of the Renaissance style north of the Alps. It was designed and built by Elias Holl, Stadtbaumeister (Master Builder of the town), in 1615Ð1624.
On 25 August 1615, the foundation stone of the building was laid by then Stadtbaumeister Elias Holl. The exterior of the building was completed in March 1620, and the interior in 1624. Technologically, the Augsburger Rathaus was a pioneering performance; upon its completion it was the first building in the world with more than six storeys. The rigid elegance of the large stonework was similar to Florence, the cultural and financial capital of Northern Italy, with which the city gladly compared itself. The self-image of the Free Imperial City of Augsburg is represented by two conspicuous ornaments on the large gable at the front of the building: the first is the Reichsadler, or Imperial Eagle of the Holy Roman Empire, representing the town's importance; the second is the large copper pine cone, or Zirbelnuss, which is the symbol of Augsburg. -wiki
Char Maas 2017
Powered by ZENFOLIO User Agreement
Cancel
Continue