Created 8-Nov-15
Modified 15-Jun-20
Visitors 16
125 photos, 1 videos
Harvest Bowl Helmets
The 'Bison' are playing with new matt green helmets. They look pretty good, the team certainly played well while wearing them. Before the game the team was practicing in the North End Zone. I work my way down to the railing for some photos and videos.
First Quarter
Western Illinois won the coin toss. The WIU 'Leathernecks' choose to deferred, which put all Bison scoring plays in the first and third quarters in front of me. Zach Vraa made an impossible touchdown catch. Pierre Gee-Tucker grabbed a pick-6. CJ Smith stripped the ball which the Bison turned into a field goal. It was 17 to 0 and the game had barely started. The Bison were about to score again, but time ran out in the first.
Second Quarter
The next play they were 80 yards away. RJ Urzendowski caught a 20 yard pass from Easton Stick on the South goal line scoring. Easton threw a 5 TD pass to Andrew Bonnet, and a 43 yard TD pass to Darius Shepherd. It was 38 to 0 at the half! The Leathernecks only had one yard of rushing for most of the game. The Bison owned the clock.
Third Quarter
King Frazier scored a touchdown on a six yard run. The Bison settle in and are content to burn time off the clock. The Bison were probably thinking Shut Out but Lance Lenoir caught a 40 yard TD pass from Trenton Norvell and the 'Leathernecks' were on the scoreboard.
By the Fourth Quarter Coach Klieman put in Cole Davis as quarterback and we were looking at a lot of new names and numbers marching across the South goal line. Lance Dunn scored two touchdowns in the 4th quarter on runs of 2 and 5 yards. The Bison were done scoring.
The game ended 59 to 7. The crowd was in full voice through out the game. They also cheered every mention of SDSU leading Illinois State. The Jackrabbit's 25-20 victory meant the Bison and Redbirds are now tied atop the MVFC standings at 5-1 with two weeks left to play. The fans can start thinking about home field advantage in the playoffs.

Ground And Pound
Since QB Carson Wentz got hurt, NDSU has pushed their rushing game harder than ever. In the last three games the Bison have rushed for 971 yards.


NDSU leads the Missouri Valley Football Conference in rushing offense and is 13th in the FCS. But with four touchdowns through the air this week, look to see more passing in future Bison games.

Links
GoBison.com has an excellent Video along with a full boxscore, that I used extensively to write my photo descriptions. They have participation rosters, play-by-play guides, team stats, and individual stats.

The NDSU Spectrum has coverage of the game with photos. A story on the new matt green Bison Helmet for the Harvest Bowl.

From Macomb Illinois we have a depressing story and a gallery of photos. 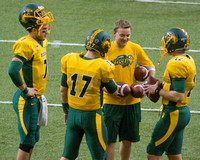 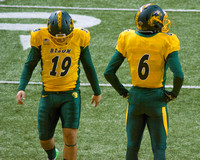 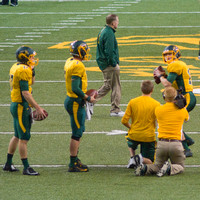 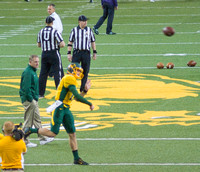 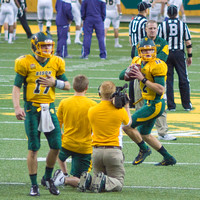 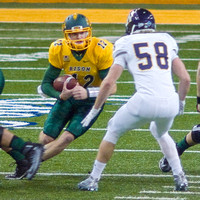 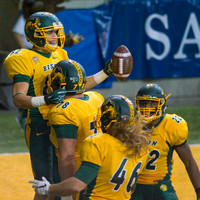 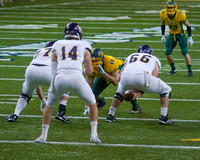 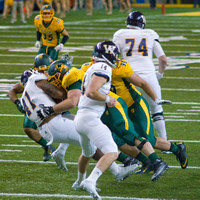 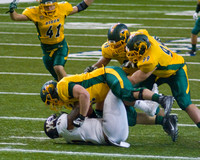