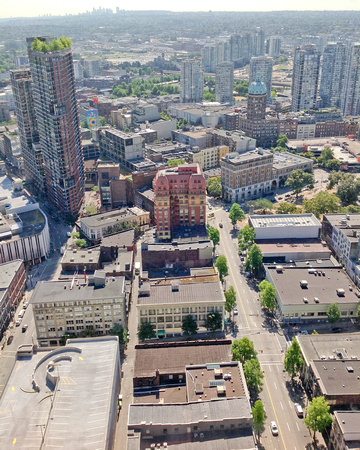 Dominion Building and Victory Square.
Located in the heart of Vancouver's former financial district at the edge of Gaston, the Dominion Building was the tallest commercial building in the entire British Empire when it was completed in 1910. At 53 metres, it held the title for only two years, as the 82-metre Sun Tower ascended in 1912.
Vancouver's first steel-framed high-rise, the building flew the British flag from a 12-metre flagpole atop the building until Canada adopted its own flag in 1965. The building's current tenants include web developers, film producers, dentists and professionals from a wide variety of industries.
The 13-storey heritage building was financed by Count von Aivensleben of Germany, a very active member of the financial community at the time. A common - but untrue - urban legend surrounds architect J.S. Heyler, who many believe fell to his death down one of the building's staircases.
2018 Craig Maas
Powered by ZENFOLIO User Agreement
Cancel
Continue