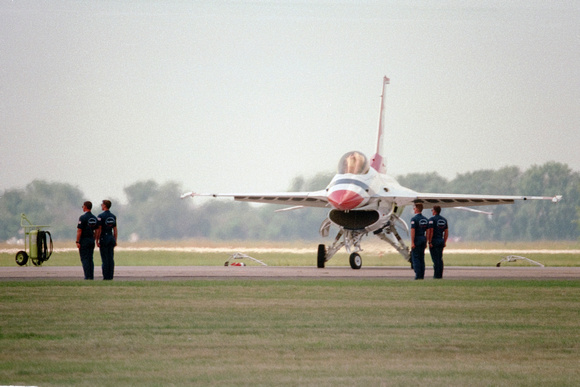 USAF Thunderbird #6 Captain Russell Quinn (Solo) prepares to turn out and taxi to the runaway.
The F-16C block 32H/J 'Falcon' aircraft currently assigned to the Thunderbirds were built in 1986 and 1987, and operated by the Thunderbirds from 1992 to 2008, having switched from the F-16A to the F-16C in 1992.
Only a few minor modifications differentiate a Thunderbird from an operational F-16C. These include the replacement of the 20 mm cannon and ammunition drum with a smoke-generating system, including its plumbing and control switches, the removal of the jet fuel starter exhaust door, and the application of the Thunderbirds' glossy red, white, and blue polyurethane paint scheme. All of the modification work is performed at the maintenance depot at Hill AFB near Ogden, Utah. Other than those modifications, the aircraft are taken from the standard USAF inventory as production fighters, and can be returned to an operational squadron in short order without any major modification.
Photo by Craig Maas on Saturday, July 8, 1995 at the Grand Forks Air Force Base.
1995 Craig Maas; scans and edits 2019.
Powered by ZENFOLIO User Agreement
Cancel
Continue