Created 9-Dec-12
Modified 15-Jun-20
Visitors 22
58 photos
December 8, 2012
The NDSU 'Bison' vs the Wofford 'Terriers' at the Fargodome. This was a quarterfinal game in the FCS. These championship games get extremely loud in the Fargodome. I brought my earplugs, although I didn't use them. It did get pin-drop quiet just before the National Anthem- a moment of silence for Sargent First Class Darren Linde of Devils Lake, and Specialist Tyler Orgaard of Bismarck. Their vehicle was hit by a roadside bomb while on duty in Afghanistan.

The 'Terriers' won the coin toss and elected to defer. I believe this was designed to throw off the 'Bison' who prefer to defer. It didn't work, as Sam Ojuri ran down the field in a series of short runs until he scored.
The Wofford defense tightened up after that. Their special teams also did a great job of pinning the 'Bison' deep into their side of the field which each punt. Brock Jensen misread where Ryan Smith was going. Blake Wylie from Wofford intercepted the throw and ran it back for a touchdown.
As the first half wound down, Brock Jensen ran 39-years, which set up a touchdown pass to Zach Vraa right in front of me.

The second half was just as loud. Both Defense prevent anything from happening. The crowd went crazy when Anthony LaVoy blocked the Wofford field goal attempt. The game ground down to the last seconds. Grant Olson left the field with 29 tackles an NDSU record. The Bison defense played excellent football as always. They created two fumbles, stopped a couple 4th downs, and held Eric Breitenstein to 'only' 135 yards- a moral victory. The Bison won 14 to 7 and advance to the semi-final round against Sam Houston.

All the deals: Box Scores 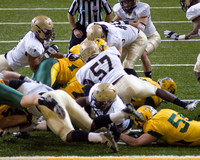 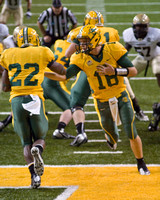 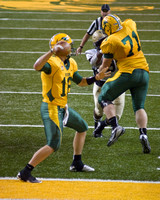 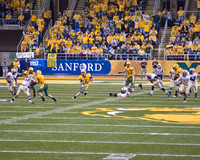 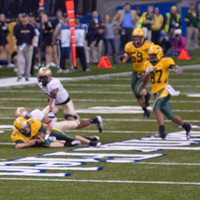 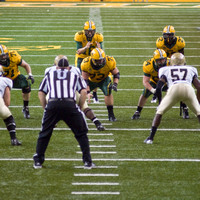