First Quarter
The SHSU 'Bearkats' went downfield. Their QB Jeremiah Briscoe was finding his receivers: Tyler Scott, Yedidiah Louis, and Nathan Steward. They got down to the NDSU 9 yardline before the 'Bison' managed to stiffen. SHSU got on the board first with a 28 yard field goal but I felt it was good to hold them to only three point. NDSU made adjustments on Defense and was able to limit the damage Briscoe was able to do with his arm. It was interesting how much time NDSU gave him. Relying instead on blanket coverage. Briscoe was only sacked once.
The NDSU Offense had a field day. The running backs were chewing up the field and QB Easton Stick found TE Jeff Illies for 16 yards and WR Darrius Shepherd for 19 yards, before running the finally 6 yards himself. On the next SHSU drive, CB Marquise Bridges made an interception at the NDSU 35. RB Bruce Anderson broke a 62 run for a TD. The Bison fans, who were already loud, when into the stratosphere. ESPN showed a Sound Pressure meter peaking at 110 db. SHSU got to their 38 before punting. RB Ty Brooks broke a 55 yard run. Unfortunately his dislocated his shoulder and left the game. Stick throw a 23-yard TD pass to Anderson.

Second Quarter
SHSU stalled in the same spot.. the 38. Stick threw to WR RJ Urzendowski for 17 yards, but then the NDSU drive stalled. Briscoe threw into the waiting arms of NDSU FS Tre Dempsey who returned it to the SHSU 15. Unfortunately a holding penalty negated the play, and a cheap shot block took out CB Jalen Alison for the season. It only made the Bison and their fans madder. Shepherd returned the kickoff 31 yards to the SHSU 43. Anderson had three runs, the last for 37 yards and another TD. Bruce's mom was dancing, and was shocked to see herself suddenly on the big screen, but the crowd gave her, and her son a loud cheer of 'Bruuuuuuuce'.
On the kick off, SHSU fumbled and Dempsey recovered for NDSU. RB Seth Wilson had two runs. Anderson had three runs including a 33-yard TD run. SHSU got to the NDSU 48 before punting. Wilson ran six times to the 12 yard line. Illies caught a TD pass. SHSU got all the way down to the NDSU 11 before Dempsey intercepted Briscoe again, in the endzone, and returning it all the way to the SHSU 40. Thankfully for the Bearkats time ran out in the half. The Bison had a 41-3 lead.

Third Quarter
The SHSU defense held NDSU to a three-and-out. Their offense got down field on a 25-yard run by TE Ragan Henderson. I'm surprised they didn't run that play more often- he was impossible to tackle. Instead Briscoe went back to the air. The drive stalled at the NDSU 14 yardline. Tre Honshtein made another field goal. NDSU WR Dimitri Williams returned the kickoff 20 yards to the NDSU 25 where he fumbled the ball. Upon review he was ruled down. Wilson broke a 58 yard run. Stick his TE Ben Ellefson for a 17 yard TD. Briscoe finally got something going with passes of 13, 4, 28, 33, and a 2-yard TD pass to Stewart. NDSU answered: Wilson with runs of 7, 11, 5, and 5 yards. Stick it Ellefson for 15 yards, and Anderson for a 31 yard TD catch. This would be Bruce Anderson's 5th touchdown of the game. He would be named NDSU Player of the Game.
"If You Want To Play In Texas" plays on the PA. The Texas flags came out (including mine) as the fans realize the Bison going to Fisco TX to the National FCS Championship game in January.

Fourth Quarter
The Fourth starts as the Third finished with a pair of Three-and-Outs. Stick threw an interception to PJ Hall who rumbled 20 yard to the NDSU 42. Briscoe took the Bearkats to the NDSU 3 yardline before CB Marquise Bridges made an interception in the endzone for a touchback. Cole Davis came in as QB for NDSU. Wison ran for -1, 12, 3, and 3 yards. Davis found Urzendowski for 11 yards. Anderson ran for 7 and 5 yards. Wilson finished with runs of 2, 4, 3, 5, 3, 3, and 1 yard. 14 plays covered 61 yard and burned all 9:12 of the clock. The NDSU Bison players thanked the Bearkats with hugs and handshakes; then raced to the NDSU student section. They climbed the railing and celebrated with their friends and classmates. NDSU wins 55 to 13. 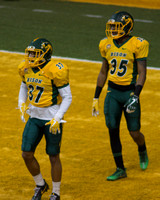 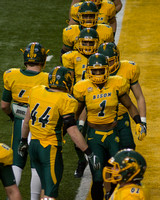 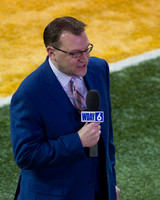 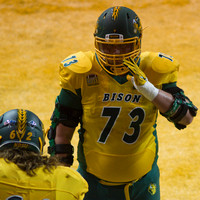 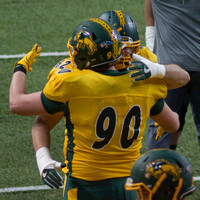 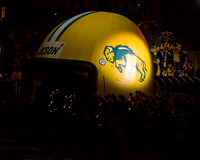 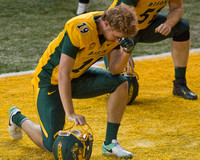 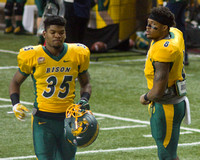 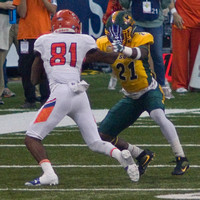 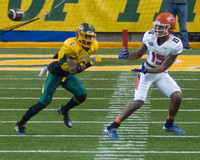 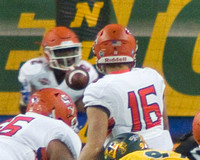 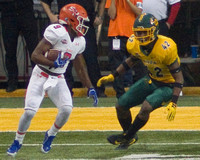