Created 15-Dec-14
Modified 15-Jun-20
Visitors 24
176 photos, 1 videos
NDSU 39, Coastal Carolina 32
The Coastal Carolina 'Chanticleers' were warming up in front of us when we arrived at our seats in the south end zone. The Bison came out of the inflatable helmet all charged up. The game starts well for the Bison. John Crockett has a quick 70-yard run. Carson Wentz hits Kevin Vaadeland for a 20-yard touchdown pass. The Bison take a 14 to 3 lead, but Coastal is no push over. They make up in speed what they lack in size. When Coastal scores a touchdown and more importantly stops the Bison offense cold. It's 14 to 10 and Coastal has found a combination that is clearly working against the Bison. 24 to 20 at the half. An exciting game. In the second half the Bison lose the lead, but the Bison defense is holds the Chanticleers to field goals. The Bison get one of their own, but Keller missing a 49-yard kick. (The punting game has been at times terrible or excellent.) The Bison still struggle in special teams, but they have cleaned up the penalties. (2 for 14 yards) John Crockett breaks a 45-yard run for a touchdown, and Wentz all but walks in for the 2-point conversion. The Bison defense holds, with Colton Heagle getting a last minute interception. Coastal was left with no time outs, so Wentz kneels in the Victory formation. The Bison win 39 to 32. It didn't have the level of drama that the SDSU game did, but had it was still nerve wracking. It may have been even louder in the Fargodome, or it was just me screaming my head off. Coastal Carolina lost a couple players including their star receiver Bruce Mapps with a back spasm. Odd because this was the second player to come out of the game before a play started! The play was dead no one hit anyone and Bruce was flopping on the ground. It was worse than soccer.

I used the Play-by-play from GoBison.com in my descriptions. GoBison.com has a good summary of the game.

Inforum carries a number of articles about the game by Jeff Kolpack, Eric Peterson, Kevin Schnept, and another article by Jeff Kolpack.
Along with the Box Score, Photos, Photos, and More Photos.

The NCAA also has a highlight video. 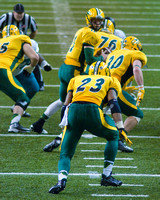 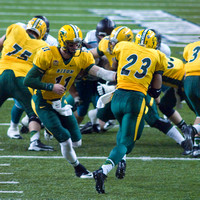 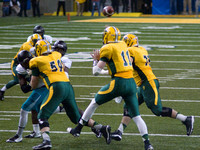 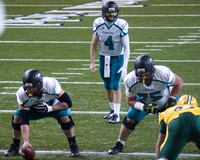 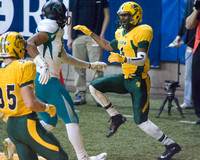 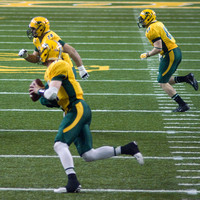 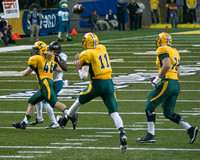 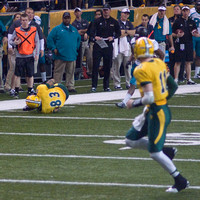