We arrived at the Fargodome almost an hour before kickoff. The University of the Incarnate Word (UIW) 'Cardinals' appeared to be writhing on the turf, much like they would be later. NDSU President Dean L. Bresciani introduces the Frisco (TX) Mayor Maher Maso who would love to have the Bison return to the National Championship in his town. As Fargo Loved having ESPN 'Game Day' return to town this morning. Bresciani presided over the raising of the Championship banner as the fans scream in delight. The 'Cardinal' players were on the sidelines, watching in the darkened dome with the flashing gold/green cellphone displays. Some appeared to be praying in the end zone. It wouldn't help. The game was televised by KVLY and the Fargodome was sold out. The game was a blow out. UIW played as best they could but were over-matched on Offense, Defense, and Special Teams. The Fargodome could have turned off the Stats Board as the Passing, Rushing, and Total numbers looked terrible for UIW. At least no one got hurt. I did feel sorry for the NDSU Cheerleaders and ROTC members who were doing push ups in the end zone after every touchdown. It was funny to see the female cheerleaders come by and sit on them, or pretend to trip over them while they were doing 40+ push ups. This was Chris Klieman's first home game as the Bison's Head Coach. He should be very happy. Not only did they dominate, but he was able to play just about everyone with back up quarterback #18 Cole Davis taking over for #11 Carson Wentz; trying out a number of running backs and receivers. Sitting in the south end zone we had a good game with 14 points scored on our end in the first quarter and 23 in the third quarter. By the fourth quarter most of the fans had left, but we stayed to the final whistle.
---------------------------------------
UIW: 00 00 00 00 = 00
NDSU 14 14 23 07 = 58 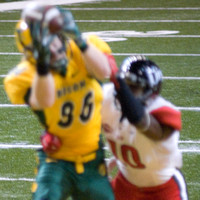 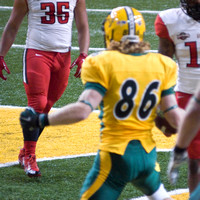 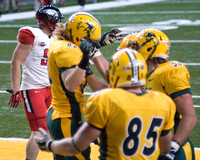 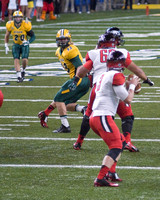 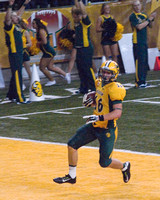 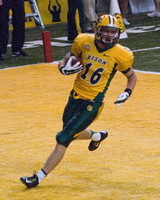