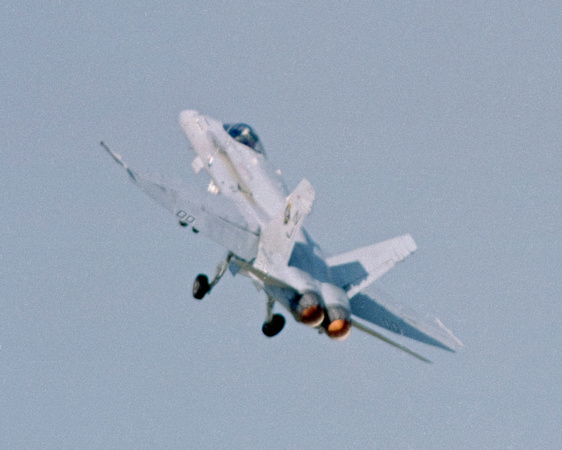 The FA-18C 'Hornet' performs an aerial demonstration. #164879 from the United States Marines, flies for the VFA-125. Forward based on the USS Abraham Lincoln.
The Hornet has two General Electric F404-GE-402 afterburning turbofan engines, that develop 11,000 lbf thrust each dry, and 17,750 lbf with afterburner.
The Hornet is also notable for having been designed to reduce maintenance. Its mean time between failures is three times greater than any other Navy strike aircraft, and requires half the maintenance time. Its General Electric F404 engines were also innovative in that they were designed with operability, reliability, and maintainability first. The engine, while unexceptional in rated performance, demonstrates exceptional robustness under various conditions and is resistant to stall and flameout The F404 engine connects to the airframe at only 10 points and can be replaced without special equipment; a four-person team can remove the engine within 20 minutes. -[wiki]