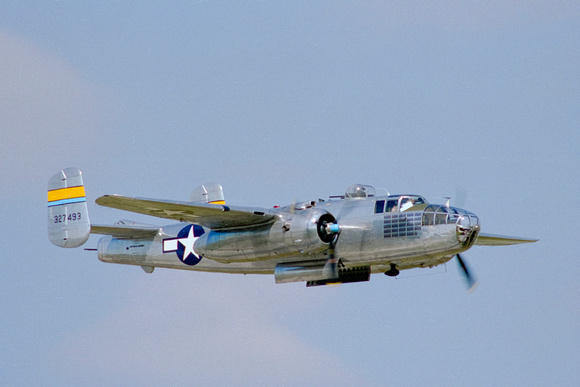 The North American BÐ25J ÔMitchellÕ of the Confederate Air Force (CAF) ÒMiss MitchellÓ flown by Lt. Donald E. Oliver (Airplane Commander) performs a fly-by in a salute to World War two veterans.
The final, and the most built, series of the Mitchell, the B-25J, looked less like earlier series apart from the well-glazed bombardier's nose of nearly-identical appearance to the earliest B-25 subtypes. The J followed the overall configuration of the H series from the cockpit aft. It had the forward dorsal turret and other armament and airframe advancements. All J models included four .50 inch light-barrel Browning AN/M2 guns in a pair of "fuselage package", conformal gun pods each flanking the lower cockpit, each pod containing two Browning M2s. By 1945, however, combat squadrons removed these. The J series restored the co-pilot's seat and dual flight controls. This medium bomber would carry 3000 pounds of bombs. -[wiki]