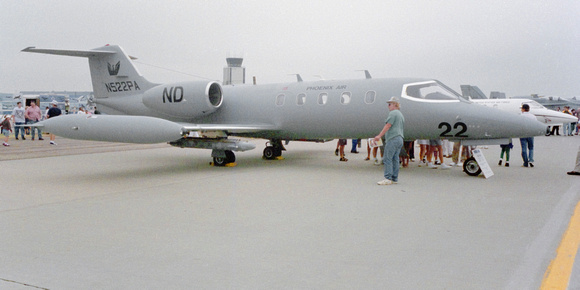 Learjet 35/36 flown by Phoenix Air, ND, N522PA.
The Learjet Model 35 and Model 36 are a series of American multi-role business jets and military transport aircraft manufactured by Learjet. When used by the United States Air Force they carry the designation C-21A. Its cabin can be arranged for 6-8 passengers. The longer-range Model 36 has a shortened passenger area to provide more space in the aft fuselage for fuel tanks. The aircraft are powered by two Garrett TFE731-2 turbofan engines. The engines are mounted in nacelles on the sides of the aft fuselage. The wings are equipped with single-slotted flaps. The wingtip fuel tanks distinguish the design from other aircraft having similar functions. [wiki]