Created 25-Nov-15
Modified 15-Jun-20
Visitors 13
105 photos
Bison Senior Day
The 'Bison' graduate 14 seniors this year. They came out of the inflatable helmet on the north end zone one by one to thunderous applause. The fans know everyone is important but QB Carson Wentz and WR Zach Vraa got the loudest applause, that is until the remaining Bison football team took to the field.
First Quarter
Missouri took the opening kick off. NDSU D-line found it easy to penetrate the Bear's offense. MSU QB #9 Brodie Lambert had no time and soon he was on the ground, so was the ball. Bison DE #96 Greg Menard popped the ball loose. It was rolling to the end zone. MLB #49 Nick DeLuca jumped on it, but it squirted out. Missouri State fell on it but DE #56 Caleb Butler pulled it free again for a Bison touchdown. During MSU's next drive NDSU DE #97 Brad Ambrosius intercepted Brodie's pass; then RB #22 King Frazier ran it in for a Touchdown. It's 14 to 0 and there is still 5:33 left in the first quarter. The game calms down a little bit. I was hoping the Bison would go faster because they were about to score (in the South Endzone, our endzone) before the quarter ended and they changed sides of the field.
Second Quarter
NDSU TE #87 Connor Wentz (Carson's cousin) grabbed a four yard pass from QB #12 Easton Stick. Cam Pedersen missed the extra point. (His only miss of the afternoon) NDSU WR #8 Dimitri Williams broke a 27 yard run for the Bison's fourth touchdown. NDSU WR #82 Zach Vraa caught a touchdown in the corner of the endzone. His 27th, which set a Bison record for most touchdown passes in a career. NDSU RB #42 Bruce Anderson caught a 6 yard pass to make the score 41 to 0 at the half.
Third Quarter
The Bison didn't waste any time, the band had barely left the field, and the fans had barely made it back into their seats when NDSU QB #11 Easton Stick hit TE #86 tight end Jeff Illies for a 30-yard touchdown. Coach Klieman pulled out the starters. The seniors got a standing ovation. #7 Cole Davis took over at Quarterback. RB #10 Lance Dunn was sprung loose by a block from Bruce Anderson, Lance ran 60 yards for a touchdown.
Fourth Quarter
Nothing much happened in the fourth quarter. The MSU 'Bears' possibly the worse team in the FCS found enough will, power, and speed to hold off the Bison underclassmen.
For one play Coach Klieman put in QB #11 Carson Wentz as a running back. He didn't take the ball, Carson just stood there until the play was over. Klieman called a time out. The coaching staff went on the field to congratulate Carson on Senior Day, and Bison Nation gave our star a standing ovation. Hopefully his broken wrist will heal by the time we need him in the playoffs. So far Easton Stick has filled in extremely well.
The Bison's last drive stalled at the four yard line. They turned the ball over on downs. I was hoping they would let #19 Ben LeCompte kick a field goal on his Senior Day. Instead they ran Darius Anderson four times in a row for a total of five yards. The game ended 55 to 0.
The crowd was loud throughout the first half. The students left first, and then fans started leaving as the game was clearly over by the half.

Bruce Anderson and Greg Menard
Running Back #42 Bruce Anderson is only a freshman (from Ruskin, Florida), but he has turned into a fan favorite. Besides being a great all-purpose player, the fans love dragging the U in his name out so it sounds like, "Bruuuuuuuuuuuuuuuuuuuuuuuuuuce!" Just like at a Bruce Springsteen concert. Even on a short carry, the fans get a charge out of Brucing. Bruce had a good day with 9 carries for 50 yards, 1 catch for 6 yards and touchdown, and one 32 yard kick off return.
Defensive End #96 Greg Menard a sophomore from Lakeville, Minnesota has some big shoes to fill, but he's doing a great job this year. Today Greg had three tackles, two sacks, one forced fumble, one fumble recovery and two quarterback hurries. I would argue that Greg is the best student on the team with a 3.90 GPA in Civil Engineering. There are Higher GPAs on the team but they're all in Physical Education. Greg was one of four Bison players named to the CoSIDA Academic All-District football team on November 5th, by a vote of the College Sports Information Directors of America.

Links
GoBison.com has an game review, Video along and a Full Boxscore, that I used extensively to write my photo descriptions. They have participation rosters, play-by-play guides, team stats, and individual stats.
The NDSU Spectrum has coverage of the game with photo. A story on Zach Vraa's record breaking touchdown.
Our hometown paper, The Fargo Forum has multiple stories by:

From Springfield Missouri we get the other side:
Videos 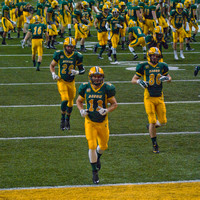 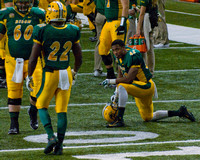 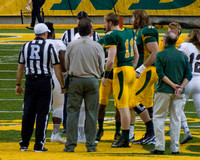 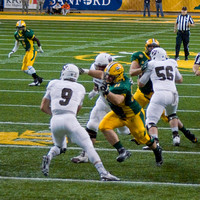 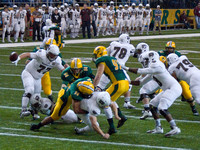 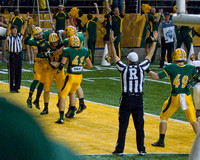 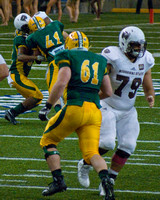