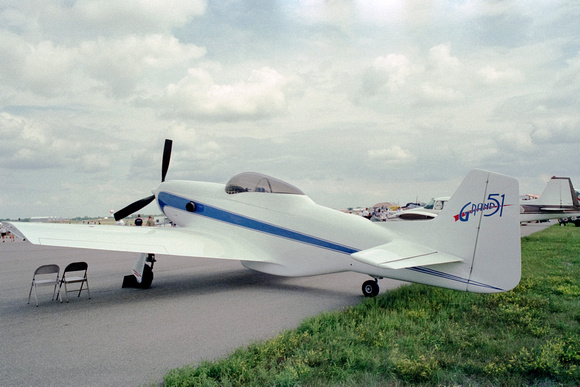 The Cameron P-51G 'Grand 51' is an American two-seat turboprop representation of the 1940s North American P-51 Mustang, designed and built by Cameron & Sons Aircraft of Coeur d'Alene, Idaho for sale as completed aircraft or kits for amateur construction. The P-51G is a full-size representation of the second world war Mustang. The design was started in 1988 with a first flight in 1998. The P-51G is a low-wing cantilever monoplane with an airframe made from carbon fibre epoxy. Of similar lines to the original Mustang, the prototype was fitted with a 1,450 hp Lycoming T53-L-701A turboprop with a three-bladed tractor propeller. The P-51G has a hydraulically operated retractable conventional landing gear with a retractable tailwheel. The two-seat cockpit has the pilot and passenger in tandem under a hinged one-piece canopy, the company does have a P-51D-style framed canopy available as an option. The Mustang-style under-fuselage airscoop is a dummy that provides a baggage compartment. -[Wikipedia]