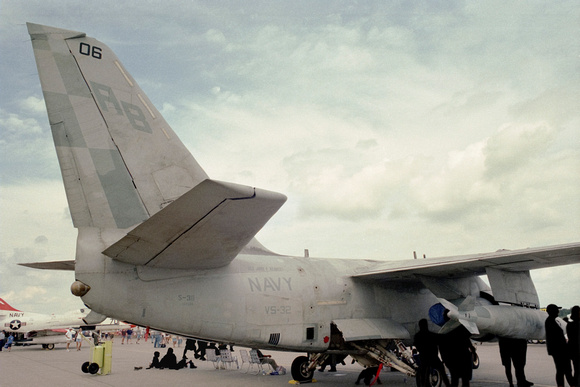 S-3B 'Viking' US Navy VS-32 `AB` #706 159393/ USS John F. Kennedy.
VS-32, Sea Control Squadron 32 is based at Naval Air Station Cecil Field, FL. In 1976, preparations for working up to the first cruise with the S3 were begun. The squadron sailed on the USS John F. Kennedy out of NS Norfolk, Virginia. During these work-ups, almost the entire squadron personnel, manuals, tools, test equipment, etc. were transported to Norfolk to be loaded onto the Kennedy. After a few weeks of underway training and verification, they would return in entirety to Cecil Field for a short break before returning to the ship. Since the closing of NAS Cecil Field, the East coast VS Squadrons have moved to Naval Air Station Jacksonville in 1999. VS-32 was deactivated in 2008. -[Wikipedia]