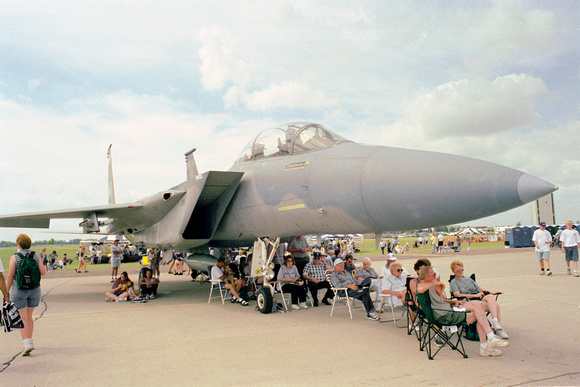 The McDonell-Douglas F-15B 'Eagle' (Two-seat training version) is an American twin-engine, all-weather tactical fighter aircraft designed to gain and maintain air supremacy in all aspects of aerial combat. Design in 1967 to meet the service's need for a dedicated air-superiority fighter. The Eagle first flew in July 1972, and entered service in 1976. It is among the most successful modern fighters, with over 100 victories and no losses in aerial combat. -[Wikipedia]
Photo by Craig on Saturday, August 21, 1999 at the Fargo AirSho.
1999, 2019 by Craig Maas.
Powered by ZENFOLIO User Agreement
Cancel
Continue