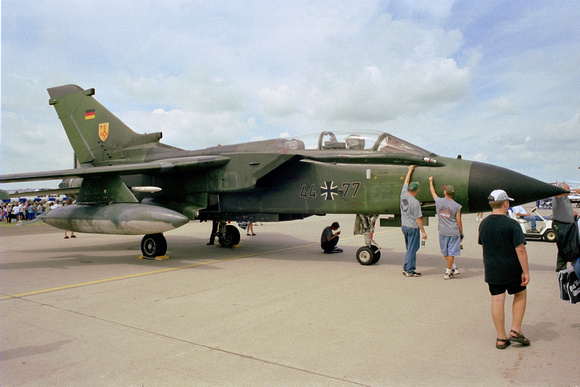 The Panavia Tornado is a family of twin-engine, variable-sweep wing multirole combat aircraft, jointly developed and manufactured by Panavia Aircraft GmbH, a tri-national consortium. (Italy, the United Kingdom, and West Germany) It first flew on 14 August 1974 and was introduced into service in 1979Ð1980. Due to its multirole design, it was able to replace several different fleets of aircraft in the adopting air forces. There are three primary Tornado variants: the Tornado IDS (interdictor/strike) fighter-bomber, the suppression of enemy air defences Tornado ECR (electronic combat/reconnaissance) and the Tornado ADV (air defence variant) interceptor aircraft. Including all variants, 992 aircraft were built. -[Wikipedia]