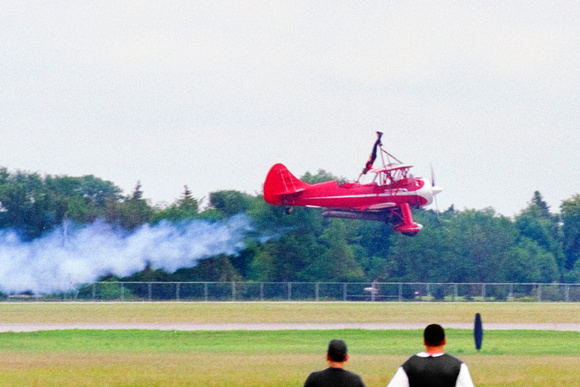 Jim Franklin retrofitted his vintage Waco biplane with a jet engine. The Red Rocket is equipped with GE CJ610-6 jet engine which was once used on Lear Jets. Franklin added an inverted oil system from a J85 jet engine, the same engine used on the T-38. Both the jet engine and Pratt & Whitney are running at the same time, but Franklin powers up the jet on climbs and some low-level passes, then idles back on dives and on the turnarounds. With the acceleration of the jet engine, the tail is up and the Waco is off and flying in seemingly a scant 100-200 feet. After building up speed, Franklin pulls up halfway down the runway at crowd center for an impressive vertical climb to 6000 feet. At that point the biplane hovers - still in a vertical attitude - before the jet engine pushes it over the top. Franklin then points the nose down, spinning all the way back to earth. -Program