Created 17-Oct-17
Modified 15-Jun-20
Visitors 14
100 photos
NDSU 'Bison' vs MSU 'Bears' 38 to 11
The Missouri State University (MSU) 'Bears' won the coin toss. They elect to defer. This means NDSU defends the south end zone for quarters 1 and 4. It also means we will miss most the action, as it randomly takes place on the other end of the field today. MSU played the Bison like the Bison. The Bears tried to stop the run and chewed up the clock. The first half seemed to go quickly.
The Bison Defense played better in the second half. "Safety #5 Robbie Grimsley had a game-high 10 tackles and made one of NDSU's three interceptions to lead a Bison defense that went 10 quarters without allowing a touchdown before Missouri State's only TD with 5:15 left in the game. Safeties #6 James Hendricks and #3 Tre Dempsey had the other Bison .interceptions." -GoBison.com. It was nice to see WR #16 RJ Urzendowski in the mix. He hauled in six passes for 82 yards including a 26-yard touchdown.
The south end zone got the NDSU 'Play of the Game' when RB #10 Lance Dunn broke for a 44-yard touchdown run in the third quarter. The game slowed down after a couple injuries including LB #48 Dan Marlette on a kickoff return. "Marlette is expected to miss the remainder of the season. He had filled in for senior linebacker Nick DeLuca, who missed two games with a knee injury." -Inforum.com. It was nice to see LB #49 Nick DeLuca back on the field. It was cool to see #37 Tre Fort playing Cornerback in the fourth quarter. MSU finally scored a touchdown. The last four minutes went by lightning fast.
North Dakota State won its 700th game as a college football program.. during Homecoming. The atmosphere is electric. MSU has always been a weak team in the MVFC, but they have always played NDSU hard, and they have gotten better these last two years. 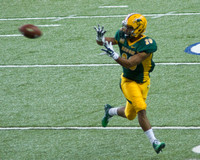 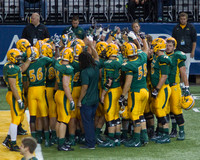 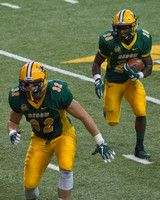 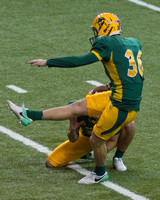 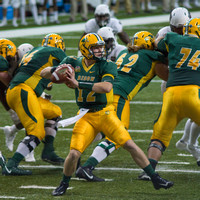 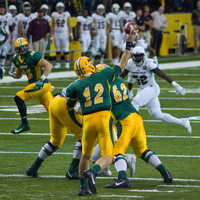 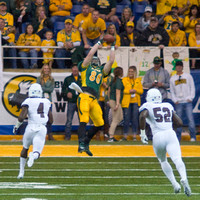