We arrived almost an hour early. I took some photos of the Bison warming up in the North End Zone including game MVP, Punter, Ben LeCompte. The early 11:00 AM kick off, we didn't have long to wait. The crowd of 18,041 was loud and never lost their voice. It cost UNI a couple false start penalties. Still, this was old hat for the Panthers, and they play the Bison harder than almost any other team.

First Quarter
UNI's quarterback Aaron Bailey marched his team down the field 10 plays, 75 yards, finishing with a 25-yard touchdown pass to Brandon Smith. The crowd-quieting opening drive seemed so effortless. UNI held the Bison to -1 yard on their first drive. I was worried it was going to be a long day, but the Bison defense found its footing and got a three-and-out of their own. I watch NDSU's Eric Perkins signal for a fair catch, and then get tackled just as the ball arrives. 15 yard penalty. It also drives the crowd into a frenzy. NDSU quarterback Easton Stick makes some short passes, which opens up the Bison run game and a one yard run by Chase Morlock for a touchdown in our end zone. (see my video).

Second Quarter
UNI got a big play of their own when Deiondré Hall causes NDSU running back Darius Anderson to fumble. UNI's Jared Farley recovers at NDSU 23. The Bison defense steps up again holding the Panthers to eight yards on three plays. UNI settles for a Michael Schmadeke 32-yard field goal. The Panthers lead the Bison 10 to 7 going into the half. Maybe it's being surrounded by cheering fans, but it seemed like the Bison were dominating the game. A feeling belied by the stats and the score.

Third Quarter
Freshman running back Bruce Anderson took the second half kickoff, spun out of tackles, and raced the UNI defenders 97 yards into our end zone for the go ahead touchdown. 14 to 10, the crowd went crazy and never came down after that play. As "Bruuuuuuce" celebrated in the end zone, he seemed to be shushing the crowd's chat with this finger to his lips.. so modest. Bison head coach, Chris Klieman spoke after the game, "We talked about it at halftime: somebody had to make a play. This game was about playmakers, and if you have the ability to make a play, you have to do it. I didn't know it would be in the first six seconds!" - the press corp laughed at this understatement. Freshman kicker Cam Pedersen was called on to hit a 54 yard field goal. A miss, wide left. I thought it was out of his range. Klieman said as much, "I got greedy." UNI takes over on the 37.

Fourth Quarter
Klieman gets greedy again, with Cam missing a 52 yard field goal. UNI takes over on 35. On the other foot, punter Ben LeCompte was having a record setting day with his three touchbacks, and deep punts. (To the UNI: 16, 16, 7, 24, 4, and 3-yard line)
King Frazier and the other running backs string an 8 play drive 90 yards for a touchdown. Bison lead 21 to 10. UNI's QB Aaron Bailey, hits Daurice Fountain for 33 yards, and face mask penalty on Pierre Gee-Tucker puts the Panthers on the NDSU 12 yard line. The Bison fans are yelling their heads off. The Bison defense hold the Panthers to six yards. They settle for a field goal. Bison lead 21 to 13.
With 3:13 left in the game, The Bison have it 4th and 2 at the UNI 36. I thought the Bison would go for it. Coach Klieman opts to kick. The boo's rain down on Klieman, but it all works out. Ben LeCompte punts the ball to the UNI 3 yard line. Surround by Bison, crazy Deiondré Hall picks it up and runs 4 yards to the seven. Hall's lucky he didn't lose the football. The Panther's dodged a Safety when they were working out of our end zone in the Third Quarter, but their luck failed in the fourth when NDSU defensive tackle Brian Schaetz, sacked UNI's Aaron Bailey in the end zone.
UNI head coach Mark Farley called for the onside kick. The ball took a high bounce, and looked like UNI might recover, but NDSU wide receiver Zach Vraa out-jumped the UNI players and came down with it safe and sound. King Frazier ran for a first down, which put Easton Stick in the Victory Formation - the Bison win their FCS Quarter Final game 23 to 13.

Post game, it seemed everyone commented on what a great match up this was. All the players, UNI and NDSU, had nothing but good things to say about each other. These two MVFC teams are evenly matched. When NDSU joined the conference, UNI was the school they used as a bench mark.


NDSU
GoBison.com has an game review, Video along and a Full Box Scores, that I relied on to write my photo descriptions. They have participation rosters, play-by-play guides, team stats, and individual stats.
The NDSU Spectrum has coverage of the game with photo by Maggie Crippen 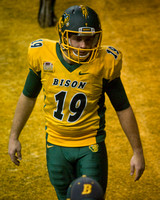 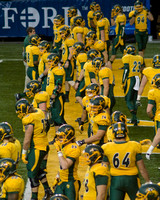 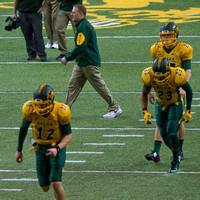 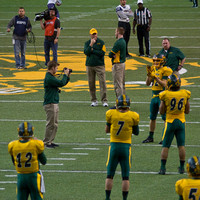 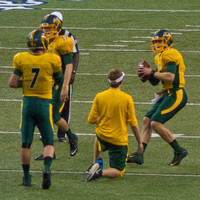 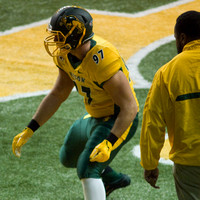 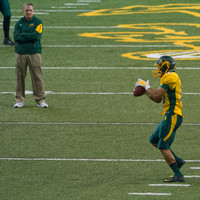 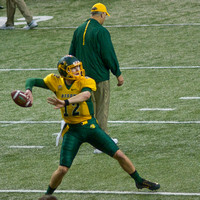