Pregame
This was fun game. Not so much an exciting game, but very festive. The NDSU student section were wearing Santa hats and the fans were in full throat. With each big Bison play the fans got louder and louder. Even in the fourth quarter when the game was all but over and the coach pulled the starting QB out of the game, the fans stayed to the end and were still yelling. The Richmond Spiders won the coin toss and deferred to the second half.
First Quarter
The Bison received the opening kick off and took to the ground five times with three passes for their first touchdown. No extra point. Ben LeCompte bobbles the hold, throws an interception, and kicks off out of bounds. The kicking team was unusually shaky in this game. Cam was struggling and Ben had the flu. He probably should not have been playing. Richmond is held to a three and out. Eric Perkins returns the Spider punt 53 yards to the Richmond 29. The Bison looking at a fourth and seven after a penalty. Cam misses a 44-yard field goal. Richmond QB Kyle Lauletta throws a 23 yard pass to Brian Brown at the 50 yardline. Followed by a three and out. The Bison move the football on the ground and in the air. NDSU QB Easton Stick's last pass of the series is complete to Chase Morlock for 27 yards and a touchdown. If they had waited one more second they would have scored in the Second Quarter on our endzone. Drat!
Second Quarter
The Spiders go for it on fourth and one. David Broadus losses 1 yard as Nick DeLuca tackles him on his own 36. The Bison take over on downs but stall at the Richmond 19. Cam misses another field goal. The fans cause a Spider false start, which causes another three and out. Five runs by Bruce Anderson, Chase Morlock, and King Frazier; capped by a 12-yard touchdown pass to Zach Vraa. Ben takes over for Cam and hits the extra point. The Spiders misfire when Kyle Lauletta's pass sails long into the waiting arms of NDSU's CJ Smith. Bad luck boomerangs right back around and bites Easton Stick when his pass bounces out of the arms of Luke Albers into the arms of Richmond's Trever Jones. A false start penalty backs up Richmond to their 17. But Richmond QB Kyle Lauletta throws a 21 yard pass to Brian Brown and a first down. Three incomplete passes later and they're kicking off.. to NDSU's Eric Perkins, who jags around some defenders. Eric returns the football 88-yards for a touchdown. The crowd goes wild. Another false start stalls the Spiders; a three and out stalls the Bison, and time runs out on the Spiders. The Bison bring a 26 to 0 lead into half time. (Ben misses the last extra point.)
Third Quarter
To start the second half, the Spiders put together a drive with four runs, and a pass, before QB Kyle Lauletta hits Tight End Garrett Hudson for a 55-yard touchdown. No problem with extra points for the Spiders. They get on the board 24 to 7. The Bison drive stalls after 32 yards. The Spiders get some love from the officiating crew. The Bison are called for pass interference twice in row, which includes an interception by NDSU Tre Dempsey, where there was no player to interfere with. It made Dempsey's end zone interception (3 plays later) that much more spectacular. The Bison are unable to get the ball out of their endzone and have to kick it out. (1) Tre Dempsey gets another interception but NDSU also gets another pass interference call. The fans are going crazy. Brad Ambrosius gets a big QB sack on third down.
Fourth Quarter
The Bison start with huge drive. 18 plays, 87 yards, which burns up 10:02 on the clock. Mostly on the ground, but even the passes are complete and stay in bounds. It ends with a 2-yard touchdown run by King Frazier. The Spiders go three and out. The Bison go right back to the ground game and chew up rest of the clock behind back up quarterback Cole Davis. Cole kneels in the Victory Formation and the Bison win 33 to 7.
Post game
The Seniors watch the clock and as it hits zero race across the field to the NDSU student section. They climb the barrier and celebrate the victory. They're going to their fifth National championship in five years. After the last Bison touchdown, the PA started playing Texas songs, which the crowd sang along to. Going to Frisco, Texas once more. The fans were waving Texas flags. I should have brought mine.

(1) Ben LeCompte punts 50 yards to Richmond's David Jones. Jones returns it one yard before he's tackled by MJ Stumpf. "And Jones suffered that arm injury, which was so gruesome ESPN elected not to show a replay." The electric cart/ambulance came on the field. Jones was surround by medical personal. The Richmond players all knelt in prayer. The Bison fans gave Jones a standing ovation as he was wheeled off the field with a broken arm. (Charlie Broaddus/The Collegian)

"And on the carry, that's another Bison first down.. ah move those chains." By the end of the third quarter, the Spiders must have been sick to death of that chant. (Scott Miller/PA)

"They (The Bison) were physical from the get-go and I really think they were relentless. Their effort on every play was unbelievable. They never took a play off." (Kyle Lauletta/Richmond quarterback)

"I want to congratulate the entire Bison Nation on an amazing journey to yet again visit us in Frisco. Your second home awaits your visit and our entire community wants to congratulate you on achieving this remarkable milestone. We look forward to another great championship game." (Maher Maso, Mayor of Frisco, TX)

"This Friday night Fargo football festival had the feel of an arena league game, or maybe a concert whose act the entire community supported. Fans did the wave and sang along." (John O'Connor/Richmond Times-Dispatch)

Most Valuable Player
King Frazier was named the game's MVP. King lead the Bison on the ground with 20 carries for 121 yards and two touchdowns. King broke 1000 yards on the season this game (1105 yards and 10 touchdowns, he has also caught the ball 11 times for 139 yards). As the season progressed he just got better and better. Especially yards after contact. Bruce Anderson had 7 for 59 yards. Lance Dunn had 10 for 54 yards. Chase Morlock had 9 for 29 yards, and quarterback Easton Stick kept the ball 5 times for 21 yard. The Bison lead on the ground 282 yards to the Spiders 38 yards. Another big day for Nick DeLuca with six tackles. The entire Bison defense played well with seven tackles for losses! 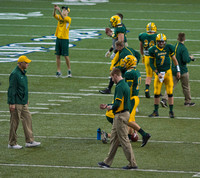 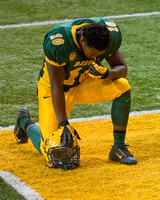 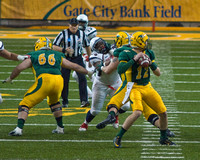 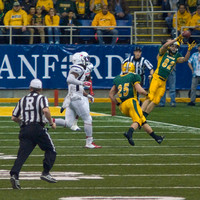 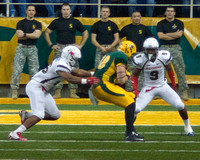 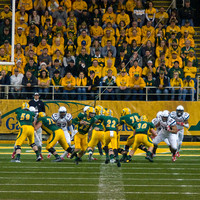 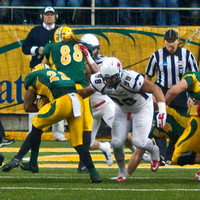 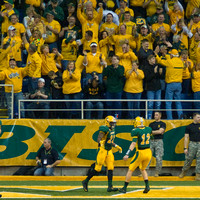 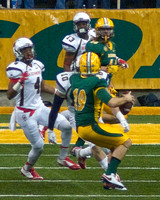