Created 18-Oct-15
Modified 15-Jun-20
Visitors 17
132 photos, 1 videos
Wave Goodbye
I'm not happy that the NDSU 'Bison' lost but I did get to see a good game. The University of South Dakota 'Coyotes' came to play. Coach Joe Glenn, his players, and his coaching staff were not going to just roll over. This the Missouri Valley, arguably the toughest football league in the FCS college play. Playing #2 NDSU at home in the Fargodome isn't easy. USD has never won here. USD hasn't won a football game against NDSU in Fargo since 1978. Back I was a freshman at NDSU!
As USD coach Glenn said after the game, "We didn't get lucky. This wasn't a lucky win for us. They didn't fumble the ball to us, they didn't throw interceptions, they didn't get hurt by the officiating. They just got outplayed by a tough, gritty bunch."
So when Miles Bergner's 33-yard field goal with 00:00 left sent the Coyote side lines onto the turf in a wild display of excitement, I felt happy for them. It meant the Bison 26 games home winning streak was over, but that was unnatural in and of itself.
In the First Quarter, The Bison scored touchdowns on a 2 yard run by Bruce Anderson and a 37 yard pass from Carson Wentz to Darrius Anderson. As the quarter ended I turned to my mom and said, "At this rate the final score will be 56 to zero." I spoke too soon, because the flatter the Bison looked the sharper the Coyotes looked. Second Quarter, USD quarterback Ryan Saeger threw a 8-yard pass to Brandt Van Roekel for a touchdown; then Ryan ran in a 1-yard touchdown on the heels of a short pass from Saeger to Trevor Bouma that went for 73 yards. Maybe the North End Zone is the lucky end zone? NDSU's Andrew Bonnet caught a 7 yard pass from Carson with 42 seconds left in the half. The Bison went to the locker room with a 21 to 7 lead. No one knew it at the time (maybe Carson?), but when Carson was holding his throwing hand after a USD sack, he had broken his wrist. Carson played rest of the game. Maybe he's tough, maybe he's stupid? But the Bison didn't score any points in the second half. The Coyotes dialed in the run defense, and the Bison couldn't convert third downs. The Bison passing game went nowhere. After a scoreless third quarter, the Coyotes hit Drew Potter for a 8-yard touchdown. Coach Glenn carefully sent in plays that got short yardage. A dozen runs, but they got first downs.
I was in the crowd; by the fourth quarter we were loud and engaged. However it seemed the Coyotes were feeding off our energy and not the Bison. The Coyotes did a masterful job of stopping the Bison offense: getting one more three-and-out. They did a beautiful job of time management, and got a lucky person foul penalty on NDSU. USD got a first down on the Bison 17 with 26 seconds to play, a one yard run to place the ball where the kicker wanted it, and then called a timeout with three seconds left. USD kicker Miles Bergner, who had made only four-of-11 attempts this season, lined it up. The Coyotes had played a perfect game. I just knew he was going to seal it, and he did.
It was an epic upset. It wasn't so much that NDSU lost but that USD won. Their history looked terrible. The Coyotes were down 143-7 points to the four-time defending champions since joining the Missouri Valley Conference in 2012. Their last win in Fargo was 1978. NDSU had a 26 game win streak going in the Fargodome. The Coyotes have lost all eight games in the Fargodome. USD's last win in the Missouri Valley was in 2013.
After the game, NDSU coach Chris Klieman said you "could see this one coming a million miles away." Well, he must have Superman's eyesight, because no one else did. Even Mick Garry of the Argus Leader predicted a 49 to 7 route before the game.

Carson Wentz
We got to the Fargodome over an hour early. I wandered around. Carson, the other quarterbacks, and rest of the Bison were warming up in the north end zone. I took a lot of photos of Carson. And then managed to get quite a few photos of him during the game and between periods. I'm glad I did. He's going in for surgery this week and will be out for six to eight weeks. This may be the last time I see him play a Bison. He was the star of the team, get Pro Football scouts interested. He was the total package. I wouldn't be surprised if he heals quick too. I'm hopeful that I'll be seeing him again. A lot depends on his replacements: Easton Stick and possibly Cole Davis- both excellent quarterbacks in their own rights. If Easton lives up to his reputation, we may not even care. But if the playoffs are on the line, no one I would rather have quarterbacking the Bison than old #11.

Links
GoBison.com has an excellent Video along with a full boxscore, that I used extensively to write my photo descriptions. They have participation rosters, play-by-play guides, team stats, and individual stats.

The NDSU Spectrum has coverage of the game with photos. Story on the Bison Defense.

The Fargo Forum has complete coverage of the game by their sports writers: 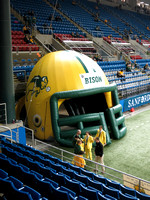 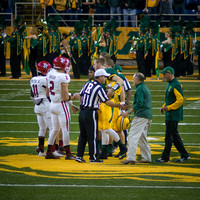 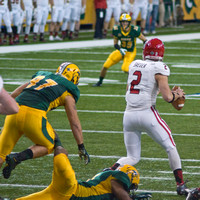 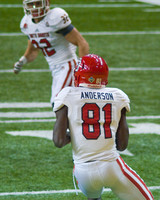 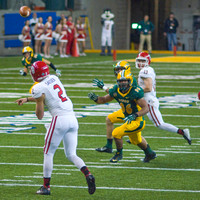 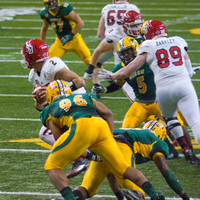 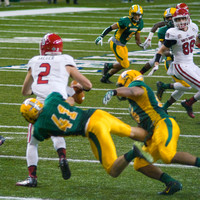