Created 10-Dec-13
Modified 15-Jun-20
Visitors 6
89 photos
The NDSU 'Bison' played the Furman University 'Paladins' in the second round of the NCAA FCS 2103 football playoffs. The game was in the 70-degree Fargodome. (It was -8 degrees outside.)

Furman came out strong. They were running and passing the ball and had success on defense. They managed 329 total yards of offense, but were unable to finish their drives.

The first exciting play by the Bison defense was a fourth down stop on the goal line. Then the Bison offense took over on downs and march all the way to the other end of the Fargodome for a touchdown. The game slowed down until the final seconds of the first half, when #16 Brock Jensen got the Bison in field goal range. Bison 10 Paladins 7 at the half.

The Bison's M.O. is a strong second half and this game was no different. Four unanswered touchdowns, including a 61 yard pick-6 by Marcus Williams. When Marcus strode into the end zone, the fans hit a game high 115 decibels. It was loud for almost all of the game. The game was quite entertaining. The Bison win 38 to 7.

Inforum coverage including a photo of our family in the 2nd row. 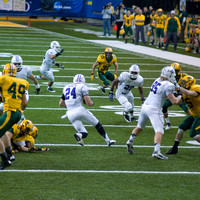 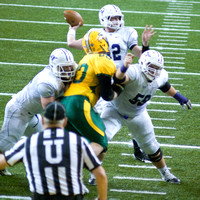 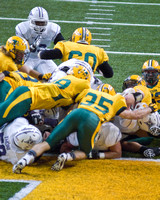 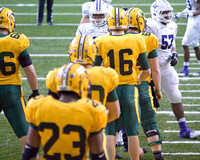 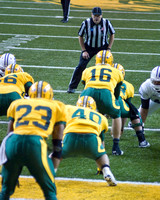