Created 9-Dec-14
Modified 15-Jun-20
Visitors 19
147 photos, 1 videos
NDSU 27, SDSU 24
The SDSU 'Jackrabbits' hop back to the Fargodome, this time playing in the FCS playoffs. SDSU coach John Stiegelmeier, had his work cut out for him. The 'Jacks' would need everything to go their way. Stiegelmeier had them coached up for the game, and they were coming off an impressive win against Montana State last week.
The first hurdle the Jacks faced was the crowd. There were 18,113 screaming Bison fans, who started loud and just got louder. SDSU quarterback Austin Sumner, relied on hand signals and it worked for them. The NDSU Bison were the ones that struggled with penalties. But the Bison were not going to be stopped by some yellow flags. NDSU quarterback Carson Wentz found R.J. Urzendowski in the end zone with a 27-yard pass. R.J., a true freshman, would have great day. The Bison almost scored at the end of the first quarter, which is important as we were sitting behind the south end zone. Carson Wentz ran into the north end zone to the delight of those fans. The SDSU defense stiffened. Defensive penalties give the Jacks good field position. Zach Zenner ran in from 17-yards out. A huge 80-yard punt return by Je Ryan Butler puts the ball on the Bison 11-yard line. Zenner scores again off the direct snap and the game is tied at 17 going into the half.
I still liked the Bison's chances. They are a second half team, and SDSU's progress came on flags, non-flags (the punt return), and trick plays. (A three running-back set built around star running back Zach Zenner taking a shotgun snap, which they ran about eight times in a row.)
In the second half the teams traded field goals: one for SDSU and two for NDSU. Time was running down on the game. Bison receiver Zach Vraa got undercut on a deep pass that he couldn't hold on to. The medical staff came out as did Coach Chris Klieman. Vraa couldn't put any weight on the leg and had to be helped off the field. The score board went out in the fourth quarter. We could only guess how much time was left.
Zach Zenner takes another direct snap, on fourth-and-3 and gets a first down. SDSU benefited from two pass interference penalties on NDSU. The crowd was going insane. I can't help think the refs were giving a little playback for all the abuse they had been taking from the fans. Jake Wieneke catches a 3-yard touchdown pass from Sumner and SDSU takes a 4-point lead with 4:25 left in the game. The Bison didn't panic, John Crockett rushed 13 yards to the 37. The Bison got another holding penalty, but Carson connected with 19-yard pass to Carey Woods. Wentz hits Urzendowski for 29 yards to the 21. The Bison finally get a pass interference on SDSU, which moves ball to the 7. With 54 seconds left in the game Carson Wentz hits R.J. Urzendowski in corner of the end zone and the Fargodome erupts. The team races onto the field as the refs spend some time confirming that it is a touchdown. SDSU still has time and time outs to snatch this game back. But Sumner throws an interception to Tre Dempsey, who was waiting, timing Austin's throw. Crockett burns up the clock for the Bison, and Wentz starts jumping around and charging up an already crazed crowd as the clock winds down to zero.
Due to regionalization of the play offs, SDSU might well be the most difficult team NDSU faces in the play offs. Coach Stiegelmeier got SDSU in a position to beat NDSU. I noticed SDSU kept Kyle Emanuel off the high-light reels in this game. NDSU's punting game was troublesome, and 11 penalties for 110 yards should have sunk them. However, the Bison know how to win, and they found a way to win today. In the post game press conference Wentz talked about the game winning throw, “We saw on tape that SDSU really locked the receivers in what they did. (SDSU players were in position, but didn’t turn their heads to make a play on the incoming ball.) It allowed me to trust (the receivers) a lot more."

I was trying a 200mm F3.5 lens during the game. I liked it. It let me follow the action on the field whether it was Urzendowski catching a touchdown in front of me, or on the other end of the field. I shot 338 photos. I'm posting less than half, which covers most of the important plays on the field. My descriptions come from my memory with a lot of details from the GoBison.com Play-by-Play. 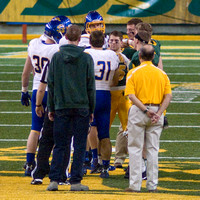 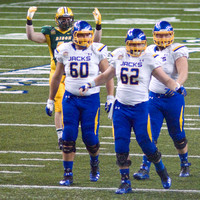 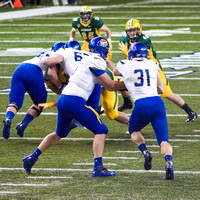 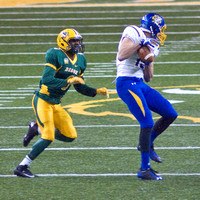 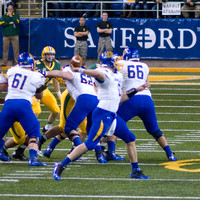 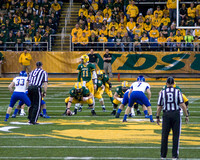 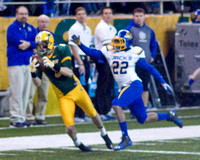 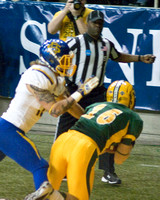 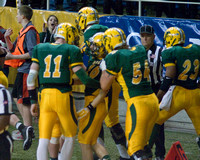 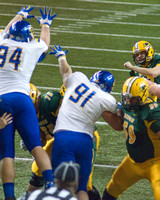