Visitors 183
Modified 15-Jun-20
Created 11-Jul-10
56 photos
2010 Great Minnesota Air Show
Bob Nelson joined my nephew and I to attend the GMAS on June 26th at the St. Cloud Regional Airport. This was St. Cloud's first air show and it looked to be very interesting. Bob and I stayed the weekend at my sister's lake cabin. The three of us left early Saturday morning in a fog bank and drove into rain. The wet fields closed one of two parking lots. Although it had stopped raining I worried we would be mired in mud. Buses ran to the airport all day long. This was followed by a 3/4 mile walk to the entrance. Free program were handed out at the entrance. (Parts of which I've used in the photo descriptions, along with Wikipedia.) We found a nice spot hidden behind the VIP Compound. It was right in front of the F-22A Raptors. The weather didn't clear until Noon. Then it got hot as an oven. Sean and I wandered around the General Exhibits and picked up some sunglasses, pizza, and frozen lemonade. The GMAS Committee promised water, but no one knew where it was. I finally found it on the other end of the airport- by then they ran out.

The F-22A was amazing. At times I thought I was watching a UFO. The way it would stop in midair, change direction, and pulse with condensation blooms as it pulled high-g turns. Even the Blue Angels pale by comparison. The sky clouded back up. After the show we looked at the static displays and wait for the crowd to thin.

Bob flagged down a ride on an ATV (thanks Ben), Sean and I hung on for dear life in the ATV's cargo bed. Traffic in the parking lot was not moving. We drank lots of water and talked about the show. Once traffic started to move, it moved slow, but didn't stop. We crawled into St. Cloud, stopping at McDonalds. It rained most of the way back to the lake cabin.

Fat Albert In A Wet Field 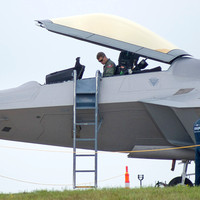 Climbing Out Of The Raptor's Cockpit

Aeroshell In The Blue Sky 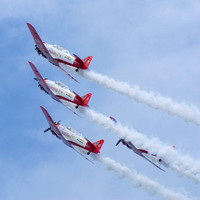