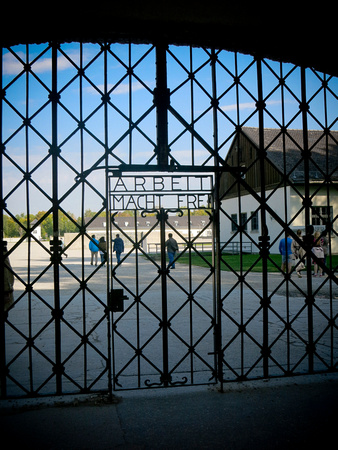 The gate at the Dachu Concentration Camp Memorial Site, DE.

Arbeit Macht Frei
A German phrase meaning "work sets you free". The slogan is known for appearing on the entrance of Auschwitz and other Nazi concentration camps. In The Kingdom of Auschwitz, Otto Friedrich wrote about Rudolf Hšss, regarding his decision to display the motto so prominently at the Auschwitz entrance: "He seems not to have intended it as a mockery, nor even to have intended it literally, as a false promise that those who worked to exhaustion would eventually be released, but rather as a kind of mystical declaration that self-sacrifice in the form of endless labour does in itself bring a kind of spiritual freedom." The signs are prominently displayed, and were seen by all prisoners and staffÑall of whom knew, suspected, or quickly learned that prisoners confined there would likely only be freed by death. The signs' psychological impact was tremendous -wiki
Char Maas 2017
Powered by ZENFOLIO User Agreement
Cancel
Continue