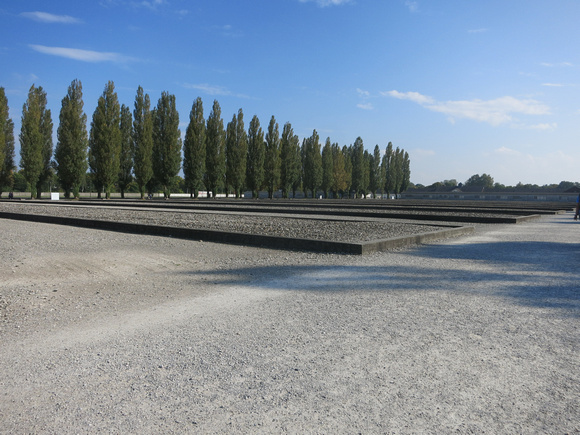 Site of the barracks at the Dachu Concentration Camp Memorial Site, DE.

Reconstructed Barrack
In the course of building the Dachau Concentration Camp Memorial Site, all the historic camp barracks were torn down between 1962 and 1964. These had been used by the US Army to accommodate the inmates of the internment camp up to 1948. Refugees and exiles were housed in the barracks up to 1962. Two barracks were reconstructed in 1964-1965 right next to the former Appellplatz (roll call area). Their structure and the arrangement of their interior rooms differ partly from those of the historic prisoners' barracks. Three variants of the living and sleeping quarters were rebuilt in the east barrack. They were intended to show how the inmates were housed in the early days of the camp (1933-1937), after conversion and enlargement (1938), and during the period with the highest occupancy rate (1944-1945). The survivors involved in planning the Memorial Site wanted in this way to illustrate their living conditions as well as how their situation worsened in the course of the war.
The exhibition and the text plates in the reconstructed barrack are out of date and worn. Many of the photos used here are SS propaganda photos intended to give an impression of order and cleanliness, the actual prison conditions, however, which were marked by the terror of the SS and later by lack of space, are difficult to imagine based on these images and the former design of the barracks. Therefore, Dachau Concentration Camp Memorial Site is currently preparing to extensively restore the buildings of the two reconstructed barracks and to completely redesign the barracks exhibition. -museum plaque
Char Maas 2017
Powered by ZENFOLIO User Agreement
Cancel
Continue