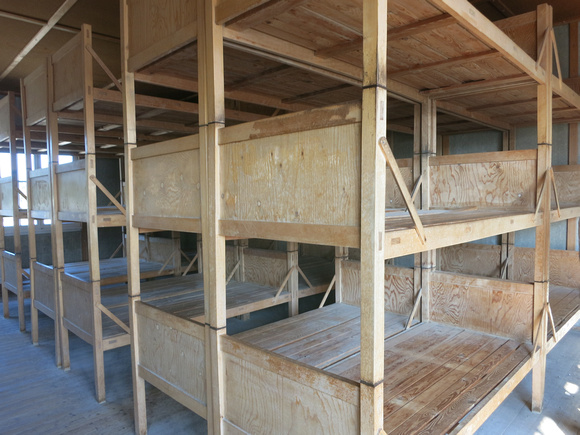 Sleeping quarters after 1938 (Reconstruction)
In 1937- 1938 the old prison camp was gradually replaced by a new, much larger camp. The 30 newly built accommodation barracks were now referred to as "blocks" A block consisted of four so-called Stuben (rooms), each with one common room and one room for sleeping quarters. Each was laid out for 52 prisoners. There was one washroom and toilet for two Stuben (rooms).
After the war started, more and more prisoners were admitted, so that the camp, which was built for a maximum of 6,240 prisoners, was soon utterly overcrowded. Immediately following the November pogrom in 1938 already more than 11,000 Jews were arrested and transported to Dachau Concentration Camp. The SS jammed them into a few barracks from which the furniture had been removed. -museum plaque