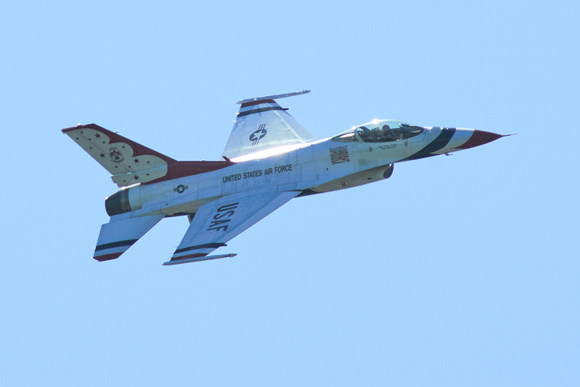 USAF Thunderbird #6 Major Michelle Curran (Opposing Solo) flies by. Photo by Craig on Saturday, July 20, 2019 at the Fargo AirSho from our roof.

Major Michelle Curran is the Opposing Solo Pilot for the U.S. Air Force Air Demonstration Squadron, flying the No. 6 jet. She earned her commission in 2009 as a graduate of the University of St. ThomasÕs Air Force ROTC program. Before joining the Thunderbirds, Curran served as an F-16 instructor pilot at NAS JRB Fort Worth, TX. She has logged more than 1,200 flight hours as an Air Force pilot, with more than 160 combat hours. Major Curran is in her first season with the team and hails from Medford, WI.
2019 by Craig Maas.
Powered by ZENFOLIO User Agreement
Cancel
Continue