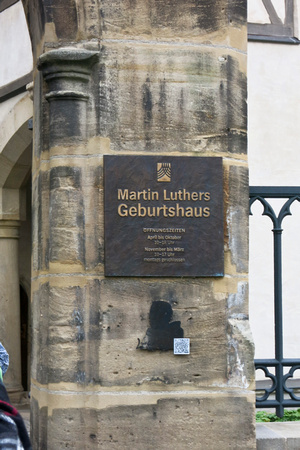 Museum Luther's Death House. Eisleben, DE.
Long regarded as the place where Martin Luther died on 18 February 1546. In 2013 it became clear that in 1726 the chronicler Eusibius Francke confused the site of the houses of Barthel Drachstedt and of his father Dr. Philipp Drachstedt. The consequence of this mistake was that in 1862 the town of Eisleben took over the ÒfalseÓ house. In 1892 the house was almost completely rebuilt in order to reflect what was believed to be its appearance at the time of LutherÕs death, even down to a reconstruction of the supposed room of his death..
In 1864, the noted architect Friedrich August SŸler visits Eisleben and demands that the dilapidated Birthplace should be given a "picturesque effect". Thanks to his initiative, by 1867 the ensemle appears as it does today. T The neighboring house on the est side is torn down in order to free up the building to tand on its own. The new facade receives new windows, as well. The courtyard and garden are redesigned and include a surrounding wall and pergola. -wiki
2017 Craig Maas
Powered by ZENFOLIO User Agreement
Cancel
Continue