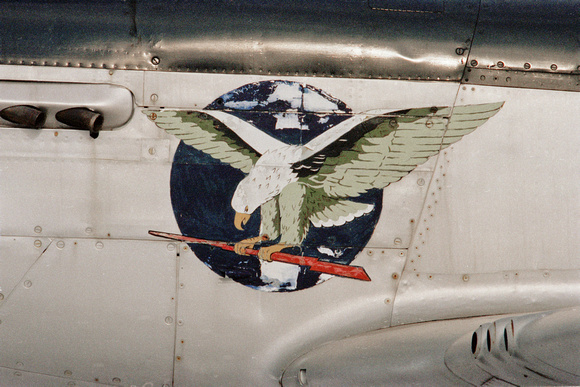 The First F-51 fighter arrived at the field Feb. 21, 1947. The plane was flown in from Kelly Field, Texas, by a regular Air Force officer, Maj. W. J. Stangel of Moorhead, Minn. Harsh winter weather prevented flying operations for some time.
..The long months of unrelenting winter cold and wind created a constant struggle just to keep the hanger warm enough so a mechanic's hand wouldn't stick to the bare metal as he worked at keeping the planes in flying shape.
..Many of the squadron's F-51s spent the entire winter buried in snow and airmen dug tunnels from the operations building to the flight line, so pilots could get to the few planes that were able to fly.
..The hanger heating problem was finally solved when a central heating system was installed in the summer of 1950.
North Dakota Air National Guard 1947-1997, page 82 "50 years of battling the cold" by SSgt. Ryan C. Christiansen, 119FW/PA.
Photo by Bob Nelson, 1985ca
1985for Bob Nelson (photographer), and 2015 Craig Maas for the scans
Powered by ZENFOLIO User Agreement
Cancel
Continue