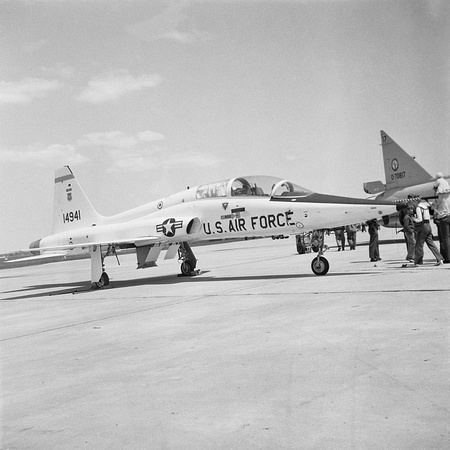 See my Photoblog for a complete description of this 1972 air show.

The Northrop T-38 Talon is a two-seat, twin-engine supersonic jet trainer. It was the world's first supersonic trainer and is also the most produced. The T-38 remains in service as of 2013 in air forces throughout the world. It first flew on 10 March 1959. It officially entering service on 17 March 1961. When production ended in 1972, 1,187 T-38s had been built. It is estimated that some 50,000 military pilots have trained on this aircraft.
The T-38 is of conventional configuration, with a small, low, long-chord wing, a single vertical stabilizer, and tricycle undercarriage. The aircraft seats a student pilot and instructor in tandem, and has intakes for its two turbojet engines at the wing roots. Its nimble performance has earned it the nickname white rocket. (Wikipedia)
2013 Craig Maas
Powered by ZENFOLIO User Agreement
Cancel
Continue