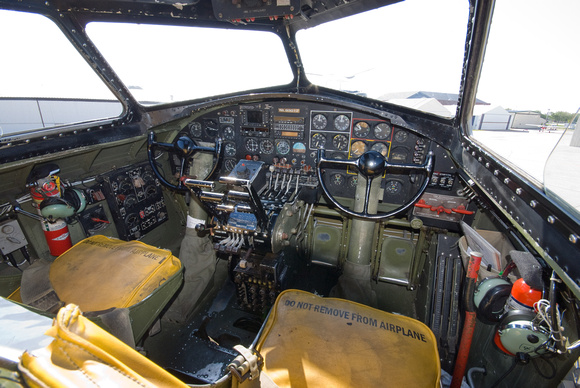 Looking into the cockpit of 'Nine O Nine', and all the flight controls.
On the pilot's side of the cockpit instrument panel: the throttles are controlled by the pilots right hand while the control column is operated by the pilots left hand. The round numbered control knob on the center pedestal is the electronic turbo control. The red push buttons on the instrument panel are for feathering engines. Center pedestal: throttles are directly in front and the pitch controls for each engine are immediately below the throttles. Lower on the pedestal are the "automatic flight controls" (or the autopilot). The lever to the right of the Copilot's seat is the manual priming pump for the engines. Later B-17G's have an all electric bomb salvo system. Three toggle switches (on the bombardier's panel, above the copilot's instrument panel, and on the forward bomb bay bulkhead) allow emergency release of bombs. Any one switch opens the bomb doors electrically and releases the bombs. Entire operation takes about 12 seconds.
2014 Craig Maas
Powered by ZENFOLIO User Agreement
Cancel
Continue