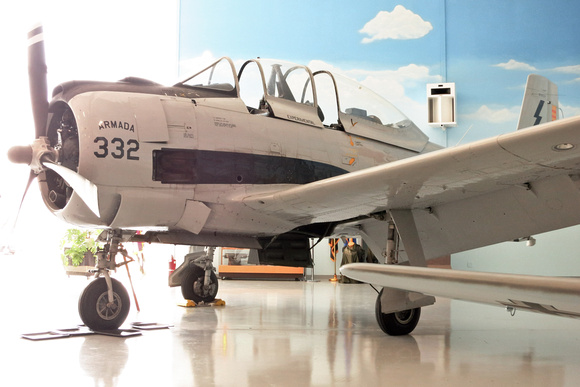 Designed in 1948 to replace the T-6 Texan trainer, the T-28A was the first U.S. Air Force trainer with retractable tricycle landing gear. it was powered by an 800 hp Wright R-1300 radial engine and was used for advanced training and armament training. Deliveries began in 1950. and the Navy ordered the T-28D and T-28C for its training. They differed in having a more powerful Wright Cyclone. 1425 hp engine and the T-28C an arrest or hook for carrier landings.
North American modified many surpluses T-28's for ground attack and designated them T-28D. They had a Wright R-1820, 1,425 hp engine installed and 0.50 cal. gun pods under the wings. They could carry up to 1,200 lbs. of bombs, rockets or napalm. Many of these were sold to South Vietnam and armed their small air farce. They were used extensively in the early years; of the Vietnam War, prior to US involvement. American "advisors" were flying them against communist forces throughout the country and Laos. Regulations dictated that the pilot be Vietnamese, but in reality, the pilots were Americans and the Vietnamese "pilot" was someone who happened to be nearby. The T-28's were used to attack communist training areas and to patrol roads and railways, sometimes following the train to its destination. As the war escalated. the South Vietnamese used them more extensively in the ground attack role in support of US and South Vietnamese Army operations.
2014 Craig Maas
Powered by ZENFOLIO User Agreement
Cancel
Continue