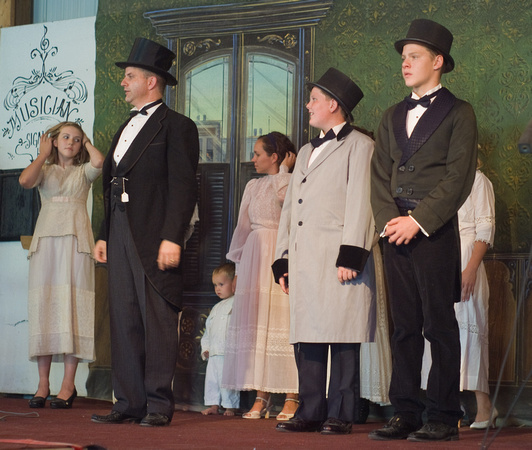 Narr: I'll have the three gentlemen step up. In 1800 a couple things changed in mens clothing that are fascinating. They went from very short pantaloons and breeches that would end at the knees to trousers were introduced. At the same time you have a waistcoat from the 18th century to the beginning of the 19th century. You see what Josh is wearing. This a cut-in or cutaway, referring to the cutaway front portion of the frock coat that has a center seam. In about 1801, the tape measure for tailoring was introduced, which meant the entire cut and fit of mens coats changed. This is cutaway coat and this Andrews? coat is also a cutaway that by 1901-1910 that would be called a morning coat.
WMSTR Fashion show at the TMB in Rollag.
2012 Craig Maas
Powered by ZENFOLIO User Agreement
Cancel
Continue