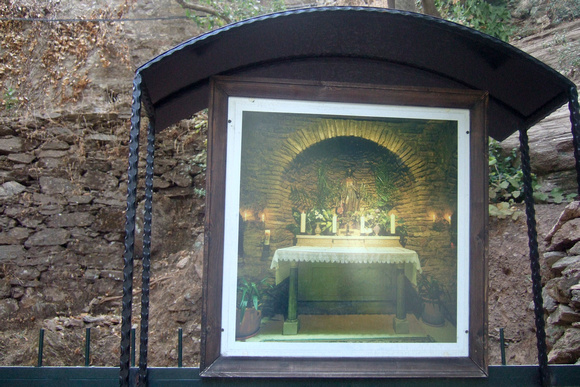 ABOUT THE SHRINEÉ
This place is considered to be the last home of the Blessed Virgin, the Mother of Jesus Christ.

The Facts According To The Scripture.
St. John in his Gospel tells us that Jesus before dying on the Cross entrusted to him the care of His Mother when he said, "Here is your Mother and from that hour St. John took Her to his own. The "Acts of the Apostles" relate how, after the death of Christ, His followers were persecuted in Jerusalem. St. Stephen was stoned in 37 A.D. St. James was beheaded in 42 A.D. And they fourth relate how they divided the world between them for preaching the Gospel, and Saint John was given Asia Minor. Now Mary had been given to his care and with the persecutions, probably brought her with him to Asia Minor.

The Facts Are Confirmed Historically.
There are 2 evidences, 1- the presence of the tomb of St. John in Ephesus, and 2- the presence of the first Basilica of the world dedicated to the Blessed Virgin. In the early days of the Church, places of worship were only dedicated to persons who had lived or died in the locality. Also, the Ecumenical Council of 431 was held in Ephesus in this Basilica for the definition of the dogma of the Divine Motherhood of Mary. The Council Fathers write about Nestorius: "... after his arrival to Ephesus, where John the Theologian and the Holy Virgin Mary, Mother of God..."
There is another confirmation in the oral tradition of villagers of Kirkindje. These people were the descendants of the Christians of Ephesus. They had passed from generation to generation, the belief of the death of Mary in this place, so they called "Panaghia Kapulu". They kept this tradition alive through the annual pilgrimage 15th August.

Discovery Of The House
During the 19th century, a book "Life of the Blessed Virgin" was published in Germany. The material for this book came from the revelations of a stigmatized Nun, Anna Catherine Emmerich. She was an invalid and had never left Germany. In her visions she describ
2008 Craig Maas
Powered by ZENFOLIO User Agreement
Cancel
Continue