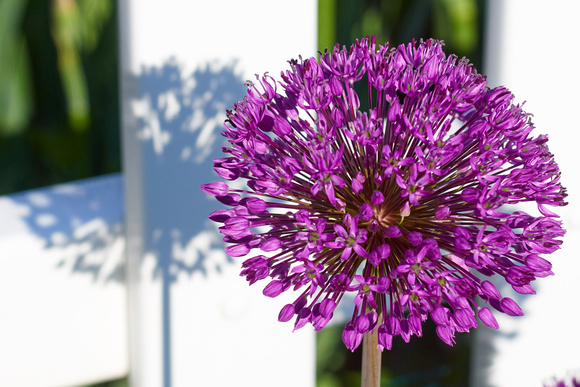 By the fence line in the front yard, in the SE corner of the SW Garden.
Allium sphaerocephalon is a plant species in the Amaryllis family known as round-headed leek and also round-headed garlic, ball-head onion, and other variations on these names. Other names include Drumsticks, and in Germany, Kugellauch. It is a hardy perennial plant.
Allium sphaerocephalon is found in the wild across all parts of Europe except in the northernmost countries (Ireland, Netherlands, Scandinavia, and the Baltic States). It is also reportedly naturalised in New York State in the US.
The species is prized by gardeners because of its striking floral display. The spherical "head" (technically an umbel) is borne on a long scape, up to 50 cm in height, usually in July. It can contain hundreds of deep purple flowers. -Wikipedia
2020 Craig Maas
Powered by ZENFOLIO User Agreement
Cancel
Continue