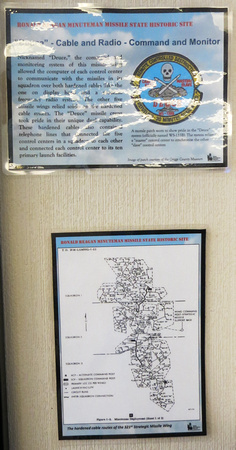 "Deuce" - Cable and Radio - Command and Monitor. Nicknamed "Deuce," the command and monitor system of this missile wing allowed the computer of each control center to communicate with the missiles in its squadron over both hardened cables (like the one on display here and a medium frequency radio system.)The other five missiles wings relied solely on the hardened cable system. The "Deuce" missile crews took pride in the their unique dual capability. The hardened cables also contained telephone lines that connected the five control centers in a squadron to each other and connected each control center to its ten primary launch facilities.