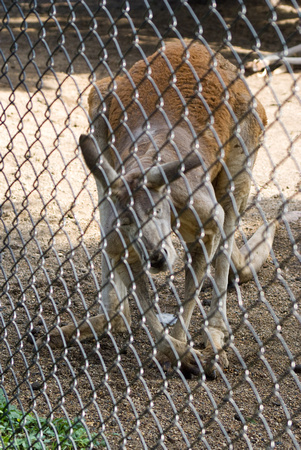 The red kangaroo is the world's largest marsupial. It can reach up to seven feet or more in height and weigh up to 200 pounds. A red kangaroo can jump over obstacles 10 feet high and run as speeds up to 40 mph, (60 km/h).
Kangaroo babies are called joeys. When they are born, they are the size of a peanut and not fully developed. They must make their way from the birth canal to inside the mother's pouch where the attach to a teat and nurse. They stay in the pouch for over 6 months and jump back inside when they sense danger.
Red kangaroos males tend to be brick red color and are known as "boomers." Females are smaller and are usually blue gray in color. They are sometimes called, "blue-flyers."

Fun Fact: When European explorers first saw these strange hopping animals they asked a native Australian (aborigine) what they were called. He replied, "kangaroo" meaning "I don't understand your question." The explorers thought this was the animal's name. Hence, the kangaroo got its name.
2011 Craig Maas
Powered by ZENFOLIO User Agreement
Cancel
Continue