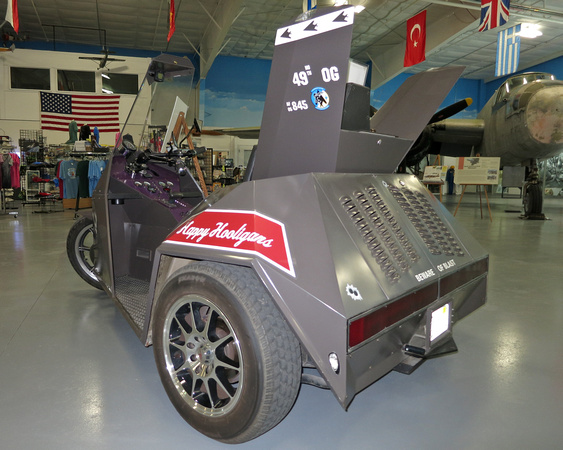 F117A Nighthawk Trike. Inspired by its use in the Gulf War, and "Watching too much American Chopper," Perry Keller decided to build an F117A Nighthawk themed motorcycle in his garage, "Basically because I wanted to see if I could." Using sills learned as a child making "Ten or Twelve go-carts... Tearing apart lawn mowers, keeping the engine and drive train, hoping them up and either crashing them or burning out the motors," Keller utilized his knowledge to completely fabricate the F117A styled trike."Makes sense," said Keller, "My wife says it's just a big boy go-kart." The attention to detail is particularly impressive. Notice the marking on the tail fin: AF05 for 2005 when it was finished, and number 845 making it the "last" nighthawk made; the final official Lockheed F117A bears the serial number 844. A two-year build process in his garage, Perry says the engine came from a GEO Metro, and the front fork were from a Yamaha motorcycle. It is legal to drive and is licensed as a motorcycle.
Engine 1 liter 3 cylinder GEO Metro
Transmission: 3 Speed Automatic
Front Fork: 1979 Yamaha 750
Fuel Consumption: 45 mpg
Range: 240 miles
Top Speed: Classified
Builder: Perry Keller
2015
Powered by ZENFOLIO User Agreement
Cancel
Continue