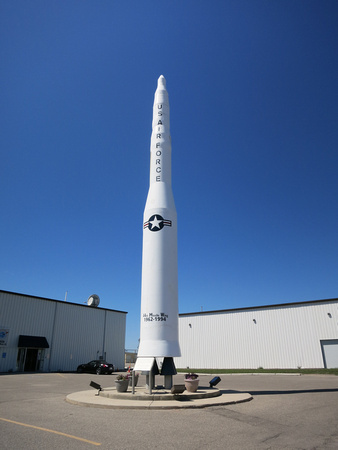 This is a Minuteman II Intercontinental ballistic missile, which was part of the defense system during the Cold War. Development of the Minuteman I began in 1958 and had its first three-stage test firing on February 1, 1961. Bay 1965 Minuteman II were housed in underground silos through the plains states. Each missile had a range of 5,500 nautical miles and packed more explosives power than all the bombs and shells expended by both sides in World War II.
This Minuteman II missile was on display at Ellsworth AFB, Rapid City, SD in front of the Pride Hanger of the 44th Missile Wing. It consists of read and replica parts and weighs 33 tons.
It was refurbished and mounted by Warren and Irene Diederich as a gift to the Fargo Air Museum.
2015
Powered by ZENFOLIO User Agreement
Cancel
Continue