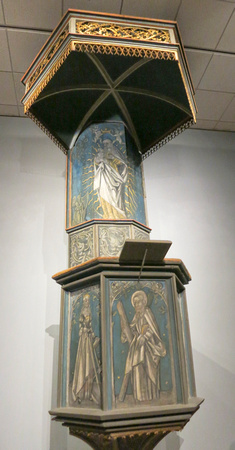 Central German workshop
Pulpit of Luther's last sermon, 1518
Oak, linden, pine, papcr, iron, paint, gilding
Evangelische Kirchengemeinde St. Andreas-Petri-Nicolai, Lutherastadt Eisleben
Standing in this pulpit on February 15, 1546, Luther closed his final sermon with the words, "...I am too weak, so we want to leave it at that." Three days later, he passed away. For centuries pilgrims have traveled to stand before this pulpit, a monument of Protestantism in Saint Andrew's Church in Eisleben.
During recent repair work a chalk inscription came to light, revealing the date of the pulpit's construction: 1518. It can now be identified as one of the first pulpits installed during the time when Luther elevated the role of sermons in church services.
The radiant Virgin Mary presides as Queen of Heaven, crowned by angels beneath a starry night sky. Sometime after 1525 and probably before 1600, the pulpit was repainted with images of Saints Catherine, Martin, Andrew, and John the Evangelist. The first two may be nods to Luther and his wife, Katharina, while Andrew stands for the church itself and John for the evangelical words preached from the pulpit.
The use of Catholic saints to honor Luther and Katharina seems surprising. Yet such blurring of religious lines was more common than we might imagine. Count Hoyer VI of Mansfeld, whose bronze tomb effigy is in this exhibition, demanded that his subjects get along, whether Protestant or Catholic. He even required that both sects share Saint Andrew's Church. The images on the pulpit may be an instance of such accommodation.
2017 Craig Maas
Powered by ZENFOLIO User Agreement
Cancel
Continue