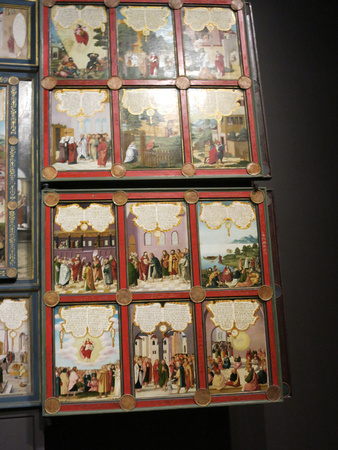 Heinrich Fullmaurer, workshop
German, c. 1505-1546
Gotha Altar, 1539-41
Mixed media on fir panel
Foundation Schloss Friedenstein Gotha
The Gotha Altar presents the most extensive cycle of Reformation-era imagery. On fourteen hinged wings and a stationary center panel, it comprises three scenes from the Old Testament's description of the Creation of the Earth and 157 panels with scenes from the life of Jesus.
The individual scenes are arranged in chronological order from top left to bottom right. Attention is always focused on Jesus, and the narrative climaxes on the final panel with Jesus' arrest, Crucifixion, and Resurrection. Contemporary clothing, the absence of halos on the saints, and the charged arguments against the pope all reflect the current affairs of Luther's time.
This "altar" was probably not originally intended for use in a church and can be understood as a deluxe picture-book Bible for the instruction of young Protestant nobles. The upper third of every single panel is filled by a gold-framed passage from the German New Testament that describes the scene depicted. Luther explicitly encouraged the use of images for instructional purposes.
The Gotha Altar is named for its present-day home, in central Germany, where it was mentioned for the first time in 1648.
2017 Craig Maas
Powered by ZENFOLIO User Agreement
Cancel
Continue