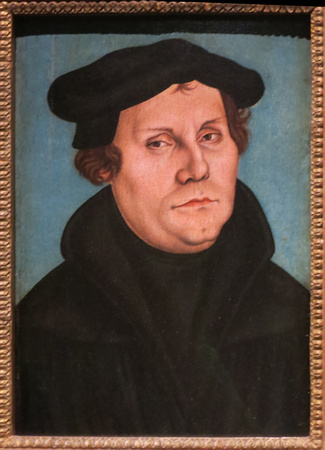 Lucas Cranach the Elder, workshop
German, 1472-1553
Portraits of Martin Luther (1528)
and Katharina von Bora (1528 or later)
Oil on copper beech
Luther Memorials Foundation of Saxony-Anhalt
As early as 1520, Luther called for abolishing the requirement of priestly celibacy (no marriage or sexual relations). Suddenly priests started to marry in increasing numbers. In1524, Luther himself-a former Augustinian monk-married the former nun Katharina von Bora. Lucas Cranach the Elder, who had sheltered Katharina, witnessed the wedding. Recognizing the political side of this private event, he and his workshop immediately began to turn out portraits of the married couple.
The portraits testify to the couple's public and political role: Luther's marriage to an escaped nun was a clear statement against the doctrine of celibacy. The paintings were mass produced as propaganda. Sent to new Protestant communities, they promoted priestly marriage and publicized the Luthers' status as a Protestant married couple.
2017 Craig Maas
Powered by ZENFOLIO User Agreement
Cancel
Continue