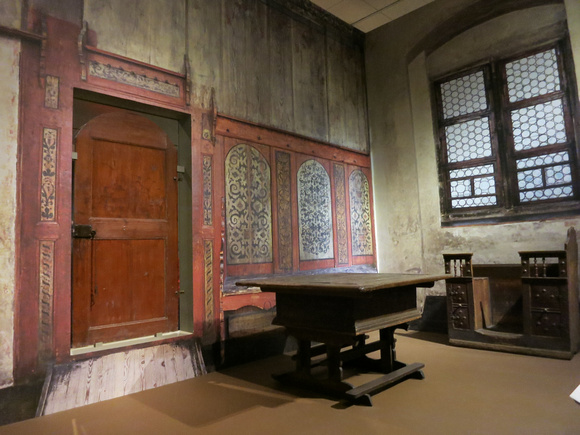 Furniture from the Luther Room
Since Luther's time, the Luther Room, located on the upper floor of the Luther House in Wittenbcrg, has been a major attraction for visitors from all over the world because it offers an opportunity to come as close as possible to Luther's world. While the rest of the building has undergone various alterations, this room and its furnishings have been left largely unchanged for centuries as a memorial. The present room decor dates back to the early 1600s; in Luther's time, the wood paneling was likely still unpainted.
The furniture of the Luther Room has been in its current configuration since at least the early 1800s, although items may originally have been in different parts of the house.

Door from the Luther Room, 16th century
Pine, iron, chalk, glass
Luther Memorials Foundation of Saxony-Anhalt
The doors bear some of the most intricate carvings in the Luther Room. The upper arches, with their carved palmertes and the curved iron hinges ending in dragon heads, are typical of Renaissance-era ornamentation. Luther and all his early associates must have passed through it.
On the back is a chalk inscription: the name "Peter" in Russian. Russian czar Peter the Great visited the Luther Room in 1712 and reportedly added his own name to the many chalk inscriptions that he saw there. His signature was soon protected by a covering. Peter's name must have been traced over during the last three hundred years, but the story of his visit reminds us of the widespread and enduring desire for connection with Luther.
2017 Craig Maas
Powered by ZENFOLIO User Agreement
Cancel
Continue