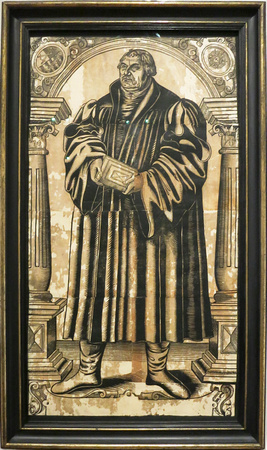 Lucas Cranach the Younger and workshop
Martin Luther, c. 1560-1580
Print assembled from eleven separate wordcuts
Luther Memorials Foundation of Saxony-Anhalt
This monumental portrait of Martin Luther is composed of eleven separate woodcut prints. The reformer holds a book, the traditional attribute of scholars but in this case also an obvious reference to his own writings, especially the translation of the Bible into German. About half a dozen of these woodcut prints survive today, but they must originally have been much more numerous, especiallw as they are known to have been reprinted in the 1580s.
The elaborate architectural frame resembles contemporary triumphal arches, and the honored parties are easily identified. Near the top of the columns we see the Saxon coat of arms and Luther's rose seal.
2017 Craig Maas
Powered by ZENFOLIO User Agreement
Cancel
Continue