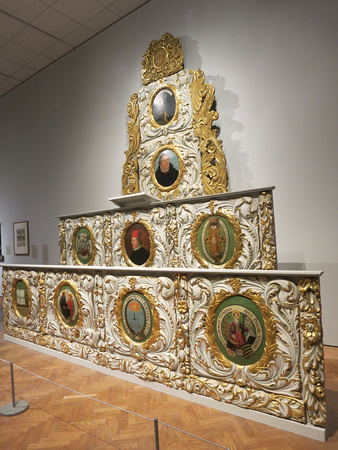 Jacob Johann Marchand
Debate lectern, after 1685
Wood, carved, painted, and leaf gilded
Lutheran Memorials Foundations of Saxony-Anhasle
This lectern was the site of important debates at Wittenberg University for nearly 150 years. It was an appropriate monument to Martin Luther, who had originally intended his Ninety-Five Theses to open a scholarly debate about indulgences. Those who used this podium followed the example of Luther as a seeker of truth.
Along with Luther's motto, Verbo solo (through the word alone), the front wall shows the crests of the university's three classical studies faculties: medicine, law, and philosophy. The second wall alludes to the founding of the university. In the center is a portrait of Martin Pollich, the first rector. To his left is the "new" seal of the university (adopted in 1514), featuring a portrait of Elector Frederick the Wise. To the right is the "old" seal from 1502 showing Saint Augustine, who continued to represent the faculty of theology. The rear wall contains a portrait of Luther positioned so that he looked over the shoulder of the presiding officer at every debate. Above Luther is a Crucifixion scene with the words Fide sola (faith alone), meaning that humankind obtains eternal life through faith alone. At the very top we see God's name in golden Hebrew script -literally the word of God.
2017 Craig Maas
Powered by ZENFOLIO User Agreement
Cancel
Continue