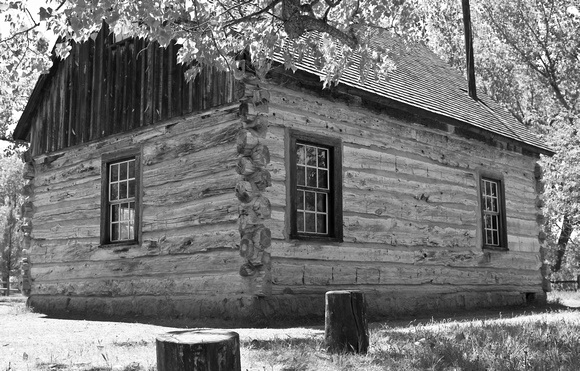 What became known as the Maltese Cross Cabin was only a temporary home for Roosevelt. He would split his time between Dakota and New York for the next several years. After returning to Dakota in 1884, he established a second ranch he named the Elkhorn. By 1887, Roosevelt began to sell his interests in the cattle industry. By 1900 the Maltese Cross Cabin was claimed by other residents.
During Roosevelt's presidency, the cabin was acquired for the World's Fair, hosted in St. Louis, MO. The cabin traveled from Missouri to Portland, OR for the Lewis and Clark Centennial Exposition. It would spend time in Fargo, ND before settling on the grounds of the state capital in Bismarck, ND.
The Daughters of the American Revolution eventually took over the care of the cabin, and acquired many of the items you can see today. In 1959, twelve years after the park was established, the Maltese Cross Cabin came to Theodore Roosevelt National Park. Restored to its original state, you can walk in Roosevelt's footsteps by touring the cabin behind the South Unit Visitor Center. -nps.gov/thro
Theodore Roosevelt National Park, Maltese Cross Cabin.
2017 Craig Maas
Powered by ZENFOLIO User Agreement
Cancel
Continue